By Newsroom on September 23, 2014Comments Off on Jim Beam Announces the Finest Fan “Statements” to Appear on Bottle Labels 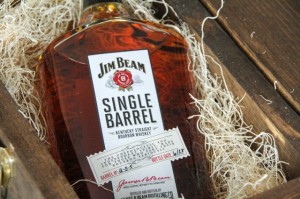 Jim Beam is excited to announce the winners of the Jim Beam “Single Barrel, Single Statement” Contest. Taking crowdsourcing to the next level by allowing fans to help co-create onto actual bottle labels sold in stores, Jim Beam Single Barrel Bourbon asked its fans to share personal “statements” – their wisdom for enjoying bourbon – that are as individual and unique as the brands’ first-ever single barrel bourbon.

With the same level of dedication and selectivity that goes into finding the less than one percent of barrels that qualify to be chosen for Jim Beam Single Barrel, Fred Noe, Jim Beam’s 7th Generation Master Distiller helped to select the finest six (6) statements from more than three-thousand eligible entries. Winning statements include:

“Every bottle of Jim Beam Single Barrel bourbon represents individuality – not only with the distinct flavor and personality of the liquid itself, but also with its hand-written bottle labels and the distillers’ wisdom that’s printed on the back labels,” said Noe. “We were thrilled with the response from our fans to share their statements and be a part of our craft-making process.”.”

The Jim Beam “Single Barrel, Single Statement” contest was held between July 16 and August 17. During that time fans of legal drinking age were asked to share their “single statement” – their wisdom for enjoying bourbon within 50 characters or less at www.JimBeamSingleStatement.com – for a chance to be featured on the actual bottle labels of Jim Beam Single Barrel.

The six winning statements will begin appearing on bottle labels of the super-premium Jim Beam Single Barrel bourbon in stores across the nation starting in early 2015.

In addition to having their names and statements printed on bottle labels sold across the nation, all six winners will receive an authentic Jim Beam Single Barrel Bourbon barrelhead, customized with their name and statement, autographed by Noe.

The two Grand Prize Winners will also receive a once-in-a-lifetime, private bourbon tasting in their hometown with friends and Noe in early-December.

Jim Beam Announces the Finest Fan “Statements” to Appear on Bottle Labels added by Newsroom on September 23, 2014
View all posts by Newsroom →