By Newsroom on September 3, 2015Comments Off on John Dewar & Sons Announce The Release Of The Deveron Single Malt 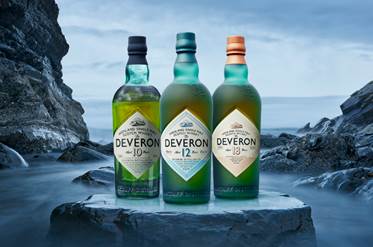 John Dewar & Sons Ltd. announces the release of The Deveron single malt which hails from MacDuff distillery, located on the northern edge of Aberdeenshire.

Located where the river meets the sea, Macduff distillery sits near the mouth of the River Deveron, shortly before its cool waters join the restless surge of the North Sea. Sheltered from the worst of the seaboard storms and winter winds, this tranquil spot has seen the creation of The Deveron malt whisky for many a decade.

A comparatively modern distillery – its spirit first began to flow in 1960 – Macduff was brought into being mainly for the purpose of supplying malt whisky to the blending industry. It was commissioned by a consortium of four businessmen, who called themselves Glen Deveron Distillers Ltd.

Emanating from five small copper pot stills, and unusual horizontal condensers that gently coax extra character from the spirit, The Deveron is an approachable dram which has a tang of coastal air about it. The distillery is set up for a light, fruity spirit that’s replete with apple tones and nutty notes.

Stephen Marshall, Bacardi’s Global Marketing Manager – Single Malts remarks: “The final one. We’ve done it and it tastes great. People underestimate the quality of whisky that can be made at a comparatively modern distillery, this is really top notch stuff. Get yourself up to Macduff, or if you can’t then stick Local Hero on the telly and pour yourself a dram.”

Each expression has been launched in selected markets around the world including Canada, France, Germany, Japan, Russia, Sweden, Taiwan, United States and United Kingdom.

John Dewar & Sons Announce The Release Of The Deveron Single Malt added by Newsroom on September 3, 2015
View all posts by Newsroom →