For more than 150 years, Anheuser-Busch, its employees and family of wholesalers have supported America’s armed forces through numerous programs and philanthropic efforts.

These include lending resources, raising funds for veterans and assisting dependents of military families. 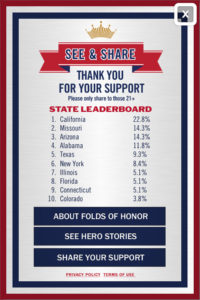 But until now, Budweiser has never used social media to help direct where in the United States a portion of this support could go.  That’s all changed with a new summer program just starting that uses a free smartphone app called Blippar.

This summer, as Budweiser donates up to $1.5 million to the Folds of Honor Foundation, the brand is asking its customers to help choose which U.S. states could receive a portion of the proceeds.

How does it work? The iconic brand is asking adult beer lovers to:

“The 10 states with the most support are eligible to receive a total of $100,000 of dedicated scholarship funds in 2014,” said Lori Shambro, director of Budweiser.

“So we are taking $100,000 of our larger donation and asking people to help us direct where that portion goes. And perhaps more importantly, the app also drives awareness for the Folds of Honor Foundation, which Budweiser has supported with more than $5 million in donations since 2010.” 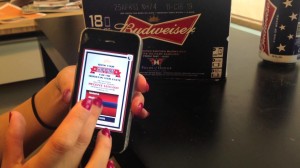 Through a series of videos available through the Blippar app, Budweiser drinkers get a chance to “meet” some of the men and women who have benefited from the support of Folds of Honor.

Each Folds of Honor scholarship has an approximate value of $5,000, allowing Budweiser to provide up to 300 scholarships from coast to coast from this summer 2013 program.

At the end of the summer, the top 10 states chosen by consumers will be allocated two Folds of Honor 2014 scholarships for eligible applicants based on the Blippar program.

“We’ve used Blippar for other brand programs, but never in a philanthropic program designed to generate awareness of a non-profit while encouraging consumers to support their local community,” said Lucas Herscovici , vice president of digital for Anheuser-Busch.

“This program gives us a unique way to use technology to enhance our longstanding relationship with the Folds of Honor Foundation in a way that Budweiser drinkers can share the experience with friends through Twitter, Facebook, email and Google Plus.”

In recognition of the company’s long history of service to the men and women of the military and their families, the Department of Defense presented Anheuser-Busch with the Secretary of Defense Outstanding Public Service Award in 2009.

“Blippar is excited to be part of this incredibly worthwhile Budweiser campaign and proud to use our innovative technology to help direct financial support to deserving military families,” said Jess Butcher, Chief Marketing Officer and Co-Founder of Blippar.

“Our technology enables static images – like Budweiser’s iconic logo – to come to life instantly, connecting the physical with the digital and allowing the user to actively engage with the Budweiser brand.”