By Newsroom on June 11, 2014Comments Off on JWT Vietnam Creates Animation Franchise to Launch New Brand For IDP

To launch a new children’s ready-to-drink dairy brand for IDP, JWT Vietnam has created an animation based franchise that includes an ongoing epic story, master-plot, characters, trailers, TVCs, a comic strip series, school and beach activations, and even a planned short movie. IDP’s large-scale move into animation-based branded content steps away from the conventional above-the-line approach adopted by competing brands in this fast- emerging market of 90 million consumers, and sets a new bar for marketing to kids in Vietnam.

IDP, one of Vietnam’s largest diary companies, picked JWT in January to come up with an entry strategy for its new KUN product line. The company aims to disrupt the country’s highly-competitive dairy category by creating the first ‘made for kids’ dairy brand that will connect with today’s fast-forward Vietnamese children.

Vietnam’s dairy market, which valued at US $1 billion, is dominated by five major players, led by local giant Vinamilk. There are 78 brands and up to 90 variants competing for consumers’ attention. The dairy sector, meanwhile, invests heavily in advertising, spending US $33 million on TV alone each year.

“We don’t see Kun as a typical FMCG brand. It’s more like an entertainment brand. We think Dreamworks and Pixar.” says Saby Mishra, CEO JWT Vietnam. “Kun is selling entertainment, magic, characters and values. The product becomes a ticket to this magical world. We are building an ongoing epic story and a new visual universe unlike anything that’s been attempted in this market. It’s great to be working with Tran Bao Minh and team at IDP who share this exciting vision.” 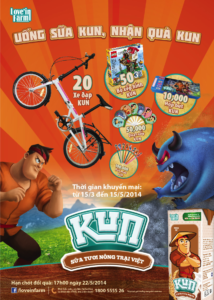 Up until now leading kids brands in Vietnam have battled it out by pushing value-added goodness for kids, whilst also trying to convince moms that their product is the best choice for children. But when it comes to the entertainment factor which is most key when talking to kids, leading brands have been quite conservative, playing with old assets that were created years ago.

JWT’s KUN world comes with a fully-loaded branded content package, including pre-launch teasers, 60 second movie- trailer style TVCs, 30 second thematic TVCs, a comic strip series, school activation in six key cities in Vietnam, road shows and even a beach activation. The work launched in May and is rolling out now across the country. JWT and IDP are also now in talks with studios to launch a movie and a TV series.

The brand name ‘KUN’, which is a straight phonetic rendering of the way Vietnamese kids actually pronounce the word “cool”, has made a huge splash since its debut in March. Sales are 130% over expected targets to date.

“We didn’t need a conventional ad agency. We wanted someone with start-up mentality and a team that can build a big, scalable concept,” said IDP Deputy CEO Tran Bao Minh, an ex Pepsico International executive and one of Vietnam’s best known marketing minds.

“In JWT we see real passion and involvement from top down, combined with very sophisticated understanding of the global kids entertainment genre. We are delighted to be co-creating Kun with JWT” he said.