By Newsroom on December 23, 2013Comments Off on Kellogg’s Brings The Spirit Of Team USA To America’s Breakfast Tables 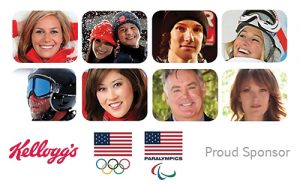 With only 50 days until Team USA competes at the Sochi 2014 Olympic Winter Games, Kellogg’s announced that Team Kellogg’s, a group of Olympic and Paralympic athletes and hopefuls, will be featured on specially-marked products, starting in late December.

Following the success of the highly popular athlete boxes from the 2012 Olympic Games, Kellogg’s is bringing them back for the Sochi Games with more featured products than ever before. Before they compete for the opportunity to inspire millions, the Team Kellogg’s athletes will be the faces of a variety of Kellogg’s brands on limited-edition boxes this winter.

“Having eaten Kellogg’s cereal since I was a kid, I’m very excited to be featured on boxes of Corn Flakes and Frosted Mini-Wheats this winter,” said Ted Ligety, U.S. Olympic alpine skier. “I’m a big proponent of the importance of breakfast, and happy to team up with Kellogg’s in support of that critical meal.”

In addition to the front-of-pack images, all of the Team Kellogg’s athletes will also be featured on the back of specially-themed packages for a wide variety of Kellogg’s brands.

“We’re thrilled to feature all of the Team Kellogg’s athletes on packaging, as a majority of them compete for Team USA to make it to the Sochi Games,” said Noel Geoffroy, Senior Vice President, Marketing & Innovation for Kellogg’s U.S. Morning Foods. “Our athletes truly believe that from great starts come great things, and we’re proud to showcase them as the face of our products.”

Each of the athletes also will be helping provide breakfast as part of the “Give A Great Start” initative, which continues through the end of the Sochi 2014 Paralympic Winter Games. As part of the campaign, the athletes will show their support by tweeting out with #greatstarts, and encouraging consumers to do the same. For each tweet with that hashtag, Kellogg’s will help provide breakfast for a child in need.

Kellogg’s Brings The Spirit Of Team USA To America’s Breakfast Tables added by Newsroom on December 23, 2013
View all posts by Newsroom →