By Newsroom on February 9, 2015Comments Off on KFC Celebrates 50th Anniversary With Year-long #50YearsOfKFC Push

KFC is marking 50 years since the Colonel landed in Great Britain with a series of campaigns toasting the brand’s half century in the UK.

Created by BBH London the year-long push spans broadcast, outdoor and digital. On Monday 9 February the multichannel ‘Families’ campaign will launch, reflecting on 50 years of KFC. 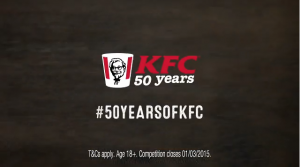 The ad tells the story of a boy welcomed into his new foster family and shows that, while families may now come in different shapes and sizes, what brings them together invariably stays the same.

A social media push #50YearsOfKFC will celebrate the tastes KFC is famous for – Original Recipe and Zinger – with two adverts (also launching Monday 9 February) leading the search for KFC’s number one fans.

David Timm, vice president of marketing at KFC, commented: “This is a landmark year for KFC and gives us the opportunity to remind our fans why they love KFC and to also hopefully bring some new fans to the Colonel’s great tasting chicken. We are extremely proud of #50YearsOfKFC and Families, which show the balance we’re tying to achieve through big, emotional brand campaigns that strike a closer connection with consumers, and celebrating our food, flavour and ingredients. 2015 will be a busy year for us as we rollout a number of plans across the year to celebrate the anniversary and thank the UK for supporting KFC for 50 years.”

#50YearsOfKFC entrants will be in with the chance on winning the chance to treat their loved ones to a KFC sharing meal each month for the next 50 years.