By Newsroom on May 7, 2014Comments Off on Kristen Bell Serves as Creative Director for Lipton Iced Tea Mini Film Series 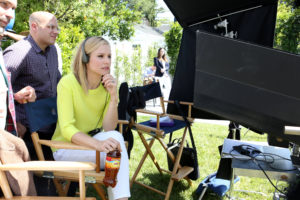 Lipton Iced Tea launched the first video in a three–part comedic film series produced in partnership with actress Kristen Bell, who for the first time stepped behind the camera to serve as creative director.

In this role, Bell helped bring to life Lipton‘s new brand personalities – Carl and Stu – two Lipton Iced Tea deliverymen who embody the playful and thoughtful sides of “Be More Tea,” the brand‘s philosophy that inspires people to break out of autopilot and embrace all of life‘s possibilities.The series follows Carl and Stu through a variety of hilarious situations as they take on people‘s “have–to–do lists,” giving them extra time for their “want–to–do lists.” Lipton is taking the concept a step further with the “Win an Extra SUNday” promotion, giving consumers across the country a chance to have their own schedules cleared of daily chores so they can take on the activities they‘ve been wanting to do – try a new restaurant, plant a garden or even skydiving.

Behind–the–Scenes of the Carl & Stu Chronicles

Serving as creative director allowed Bell to explore the artistic side of production and help shape the film series‘ message of positivity.

“In the series, Carl and Stu remind us that we need to break out of our routines and embrace positivity and our passions in life,” Bell said. “I‘m proud I could bring my creative point–of–view and a little sense of humor to this project.”

The first video in the Carl & Stu Chronicles, “A Princess Ride,” illustrates how the duo flawlessly tackles their boss’ quirky to–do list, much to his surprise and pleasure. Two more videos will be released later this summer. All videos will be posted to BeMoreTea.Tumblr.com.

“Kristen was so invested and involved with the program from the beginning, helping to develop Carl and Stu’s personalities, contributing to video scripts and bringing ‘Win an Extra SUNday’ to life for consumers,” said Linda Bethea, senior director of marketing, Pepsi Lipton Partnership. “Lipton Iced Tea wants to help revitalize fans and encourage them to embrace all of life’s possibilities, and Kristen really helped bring this concept to life in each video.” 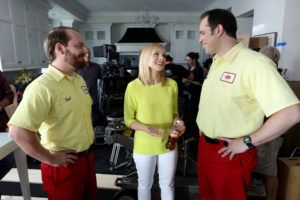 Carl and Stu are also encouraging consumers to participate in the “Win an Extra SUNday,” promotion, which runs from May 16 to Sept. 6. To enter, consumers visit LiptonSUNday.com and enter codes found under caps of specially–marked Lipton bottled iced tea varieties, like Peach Iced Tea and Diet Green Tea with Citrus. Instant winners will earn minutes, which count toward having Lipton complete a task on their have–to–do list.

Consumers who earn minutes from Lipton Iced Tea can choose which tasks they want checked off their have–to–do list, from researching airfare and vacation spots online to mowing the lawn or doing laundry.

Kristen Bell Serves as Creative Director for Lipton Iced Tea Mini Film Series added by Newsroom on May 7, 2014
View all posts by Newsroom →