By Newsroom on July 24, 2017Comments Off on Kristen Wiig Comically Channels Every Man, Woman and Child in America for Pizza Hut

Pizza Hut has tapped Kristen Wiig for its latest “Everyman” campaign from Droga5. In the two TV spots, Wiig channels the idea that Pizza Hut is a brand for everyone to enjoy by playing a host of different characters, from an older farmer to a tire-flipping, CrossFit junkie. 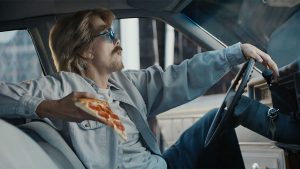 Pizza Hut chief brand and concept officer Jeff Fox said Wiig was a great fit for the role because of her versatility and her ability to play so many different characters—as shown seen in her time on Saturday Night Live.

“With [Wiig’s] brand of humour, her comedic chops, it was a perfect combination of what we wanted to talk about as Pizza Hut and have Kristen bring that to life,” Fox said.

Droga5 and Pizza Hut worked closely and collaboratively with the actress to come up with the many hats Wiig would wear in the ads.

The “Everyman” campaign is fully integrated and includes 60- and 30-second TV spots as well as radio, digital, social media and special offers (mentioned in the second spot below).

Kristen Wiig Comically Channels Every Man, Woman and Child in America for Pizza Hut added by Newsroom on July 24, 2017
View all posts by Newsroom →