By Newsroom on July 17, 2014Comments Off on Lay’s Potato Chips Reveals The Finalists For ‘Do Us A Flavor’ Contest

Lay’s potato chips, one of the marquee brands from PepsiCo‘s Frito-Lay division, announced the four finalist flavors in its Lay’s “Do Us A Flavor” contest.

Lay’s Cappuccino, Lay’s Cheddar Bacon Mac & Cheese, Lay’s Kettle Cooked Wasabi Ginger and Lay’s Wavy Mango Salsa flavored potato chips were selected as finalists from the more than 14 million entries submitted to the contest between January 13 and April 5, 2014. All four finalist flavors have been fully developed by Frito-Lay’s culinary experts and will make their debut on store shelves nationwide later this month. Consumer votes will determine which flavor is selected as the winner, with the finalist behind the winning idea taking home a $1 million grand prize. 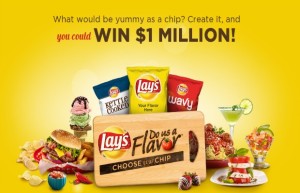 From July 28 through October 18, 2014, consumers may vote once each day for their favorite finalist flavor here; via Twitter, Instagram and/or Vine using the hashtags #SaveCappuccino, #SaveBaconMac, #SaveWasabi or #SaveMango; and/or via text message by texting “Cappuccino,” “Bacon Mac,” “Wasabi” or “Mango” to 24477 (CHIPS). The winning flavor will be revealed this November and will remain on store shelves following the completion of the contest.

“For just the second time in history, we asked fans across the U.S. to tell us what flavors they thought would be ‘yummy as a chip,’ and the response blew us away,” said Ram Krishnan, senior vice president of marketing, Frito-Lay North America.

“The number and range of flavor ideas shared, the level of engagement our fans had with the program and the anticipation that has been mounting over the last several weeks as we prepared to name our finalists have demonstrated once again the incredible passion and excitement our fans have for great potato chip flavors. We can’t wait to see which flavor America selects as its favorite.” 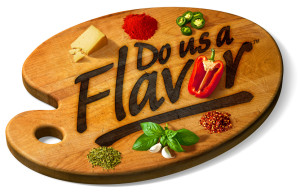 The contest finalists are Chad Scott from Las Vegas, Nev., who submitted Cappuccino; Matt Allen from Troy, Ohio, who submitted Cheddar Bacon Mac & Cheese; Meneko Spigner McBeth from Deptford, N.J., who submitted Wasabi Ginger; and Julia Stanley-Metz from Sacramento, Calif., who submitted Mango Salsa. This week, the four finalists joined the Lay’s brand in New York City – a place known for bringing unique flavors from around the world together – where they officially unveiled their flavors in a dramatic moment broadcast on gigantic screens high above Times Square. Following the reveal, all four finalists distributed the first free samples of their flavors from a 24-foot all-electric Frito-Lay delivery truck.

As the finalists now return to their hometowns, their local communities are gearing up for special events to celebrate each finalist’s success and kick-off the voting phase of the contest.

Lay’s Potato Chips Reveals The Finalists For ‘Do Us A Flavor’ Contest added by Newsroom on July 17, 2014
View all posts by Newsroom →