Lindt Celebrates Christmas In July, Offering Fans A Chance To Win A Trip To New York

By Newsroom on July 17, 2014Comments Off on Lindt Celebrates Christmas In July, Offering Fans A Chance To Win A Trip To New York

With less than 200 days until Christmas, it’s never too early to get in the holiday spirit! Premium chocolatier Lindt USA is kicking off the holidays six months early by offering chocolate lovers fun ways to get in the holiday spirit this summer. To celebrate the second year of its “Enchanting World of Lindt Chocolate” float in the Macy’s Thanksgiving Day Parade that debuted in 2013, Lindt is hosting a “Christmas in July” contest, offering fans the chance to win a once in a lifetime trip to watch the spectacle live in New York.

The Macy’s Thanksgiving Day Parade is one of the most iconic holiday celebrations, and Lindt is offering a VIP experience to see some of the famous floats, balloons and the nation’s hottest performers live at the Parade this year. To participate in the “Christmas in July” contest, fans can visit Lindt’s Facebook page now through July 25, 2014, to create a digital holiday card to send to friends and family, and share their #LindtJoy story of how Lindt chocolate brings joy during the holidays.

All entrants will be entered to win one of 25 chocolate prizes, and one lucky winner will be selected to receive a trip for four to New York to watch the Parade from the Exclusive Grandstand and a shopping spree at the Lindt Chocolate Shop in New York. Fans can also get in the Christmas in July spirit with special gifts and 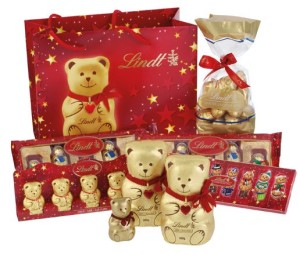 discounts, while supplies last, at Lindt Chocolate Shops around the country from July 23-28, 2014, including:

“The holidays are one of the most joyful seasons and we are excited to give chocolate lovers a way to get into the holiday spirit early this year by celebrating Christmas in July with Lindt,” said Danielle O’Neil, vice president of marketing, Lindt USA. “We are thrilled our spectacular float will return to the line-up of the Macy’s Parade and look forward to having a lucky fan join us to watch the parade live as we spread chocolate joy once again through the streets of New York this November.”

The “Enchanting World of Lindt Chocolate” float rises three stories above a spectacular chocolate shop, featuring the Lindt Master Chocolatier as he orchestrates the pouring and casting of Lindt Bear and other chocolate holiday figures. Through the magic of the Macy’s Parade, the Lindt Master Chocolatier makes life-sized puppets and spoons work in tandem to create delicious premium chocolate delights for millions of fans. The Lindt float will join the lineup of exclusive floats during the 88th Annual Macy’s Thanksgiving Day Parade airing nationwide on NBC, on Thursday, November 27, 2014, from 9 a.m.-12 p.m., in all time zones.

Lindt Celebrates Christmas In July, Offering Fans A Chance To Win A Trip To New York added by Newsroom on July 17, 2014
View all posts by Newsroom →