By Newsroom on January 15, 2015Comments Off on Lyle’s Tours London With Grin Activated Syrup Dispenser 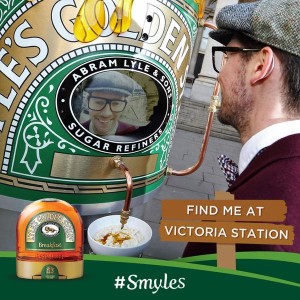 Lyle’s Golden Syrup kicked off a tour of London with a giant ‘smile activated’ syrup dispenser in a PR stunt to raise brand awareness.

Holding 5kgs of syrup the dispenser is a giant replica of a Lyle’s Golden Syrup green tin. It has a sensor that can detect a smile and doles out free syrup onto a bowl of porridge.

The activity is part of a marketing campaign that includes print and social media.

Starting in London Victoria, the dispenser will ‘tour the country’ to encourage people to engage with the brand.

The concept was borne out of research that revealed almost half of all Brits think January is the most depressing month of the year.

“It’s wonderful how a simple smile can instantly make you feel better and in-turn its contagious effect on others,” said brand licensing manager Sara Harrison at Lyle’s Golden Syrup.

“We want to spread smiles across the UK with the simple joy that a squeeze of Lyle’s Golden Syrup brings at breakfast.”

Mischief PR, Slice promotions and Helix 3D were the agencies behind this promotion.