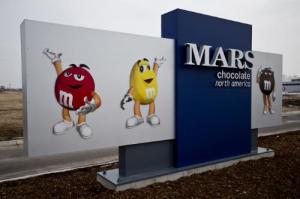 “We’re proud that this state-of-the-art site engages cutting-edge environmental standards, setting an example for others to follow,” said Bret Spangler, Site Director – Topeka, Mars Chocolate North America. “Mars is committed to putting our Principles into Action to drive leadership in sustainability. LEED Gold certification for the Topeka facility is another shining example of our ambitious goal to make our factories and offices ‘Sustainable in a Generation.'”

Kansas Governor Sam Brownback applauded the accomplishment. “By working toward, and achieving LEED Gold Status, Mars Topeka continues to demonstrate its commitment to its workers and our community,” said Governor Brownback.  “This is a tremendous achievement and I congratulate them.”

To meet the precise requirements to become LEED Gold certified, the Topeka site includes several sustainable systems and features, such as: 100 percent renewable electricity, state-of-the art heat recovery systems, rain water harvesting for sewage transfer in the office area and for landscape irrigation, low-flow water fixtures, energy-efficient lighting, reusing and recycling building materials, use of native grasses without irrigation, and the use of low-emitting local and regional materials.

Including the Topeka site, nine of the 10 Mars Chocolate North America factories have achieved ‘zero waste to landfill.’ This target is one of several 2015 global goals outlined in the Mars Principles in Action Summary, published in July on mars.com.

The fourth annual report details the company’s approach to business and its commitment to put the Mars Five Principles into action.  This includes a target for the private, family-owned business to eliminate all fossil fuel energy use and greenhouse gas emissions from its direct operations by 2040.

Since 2011, Mars, Incorporated has aimed to achieve LEED Gold certification for all new major buildings globally. Additional sustainability initiatives undertaken by Mars in North America include:

To learn more about the company’s commitment to sustainability, please visit here.