By Newsroom on April 9, 2018Comments Off on McCoy’s Launches First Ever Radio Campaign via WCRS 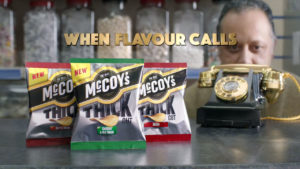 McCoy’s – the UK’s number one ridged crisp – launches their first radio campaign to promote some of it’s much loved flavours with a twist.

Two years after his TV debut, Flavour has finally made it to radio. But he’s more shock-jock than drive-time-smoothie, as we hear him indiscriminately prank-dial the unprepared nation with one message. Eat McCoy’s, because Flavour calls. He’s not convenient, he’s not considerate, but you can’t deny his persistence.

The four spots showcase the distinctive characteristics of some of McCoy’s most popular flavours including Cheddar and Onion, Flame Grilled Steak, Thai Sweet Chicken and the new and improved Paprika.

The campaign by WCRS, will be further supported by the re-running of the original 20” TV spot ‘When Flavour Calls’ work alongside VOD and McCoy’s’ social channels.

Claire Cooper, Marketing Manager at KP Snacks said: “We felt the assets of a ringing telephone and the voice of ‘Flavour’ himself from the McCoy’s ‘When Flavour Calls’ campaign naturally lent themselves to a radio environment. This extension affords the brand the opportunity to strengthen the reach of the overall campaign whilst delivering the McCoy’s flavour message to a new audience in a humorous, maverick and distinctively McCoy’s way.”

Billy Faithfull, Executive Creative Director at WCRS said: “Flavour calls whenever he damn pleases. So, the recipients had to be realistic; harassed workers in mundane office jobs, pre-occupied parents trying to survive tantrums, or simply eager-to-please work experience kids afraid of saying the wrong thing. These adlibbed performances are the perfect – and very British – tonic to Flavour’s typical pompous, preaching.”

McCoy’s Launches First Ever Radio Campaign via WCRS added by Newsroom on April 9, 2018
View all posts by Newsroom →