By Newsroom on November 20, 2013Comments Off on McDonald’s Challenges DJs Across USA with the Launch of the Flavor Battle 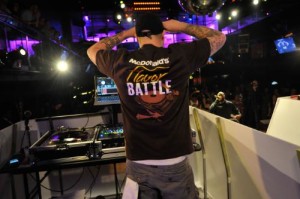 Hip-hop and burgers join forces as McDonald’s USA announced the launch of its 2013-2014 Flavor Battle competition.

The 13-week national DJ competition challenges some of America’s hottest up-and-coming mix masters to show off and prove they are the best on the 1s and 2s.

Now in its fifth year, the competition has garnered recognition from hip-hop elites, such as DJ Funkmaster Flex, who will serve as this year’s host.

“DJs are the key holders to what’s hot and what’s not in the music industry,” Flex said. “Just like McDonald’s is constantly innovating the game with new menu items, DJs are similar, as they are creating and introducing new beats to their fans all the time.”

Music and burger lovers can listen to a custom music mix from each DJ here and vote daily for their favorite flavor master in each region. The three DJs with the most votes, one from each region, will travel to the finale in New York City to compete in front of a panel of celebrity judges and crowd of audiophiles. Ultimately, one DJ will be crowned the Flavor Battle champion and take home a $10,000 cash prize and $1,000 in McDonald’s Arch Cards. 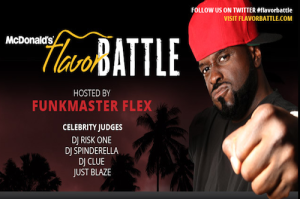 “The mixes this year are epic,” Flex said. “The fact that anyone can visit FlavorBattle.com to listen to these hot mixes and vote are key to spreading the word about this competition.”

Music lovers are encouraged to vote often for their favorite mix-master. Each vote helps the DJ advance to the next round and also qualifies consumers for a chance to win a $2,000 cash grand prize and Flavor Battle DJ equipment. Voters can also share their top picks with friends and followers via Facebook and Twitter directly from Flavor Battle website.

“McDonald’s Flavor Battle brings relevant music and our great tasting burgers together through a fun and unexpected mash up,” said Rob Jackson, McDonald’s U.S. marketing director. “Just as music constantly evolves, McDonald’s understands the importance of evolving our menu to accommodate the ever changing tastes of our customers.”

In June 2013, McDonald’s created three new flavors of the iconic Quarter Pounder Burger. Made with 100 percent beef, customers can choose from three Quarter Pounder Burger varieties, including the Bacon Habanero Ranch, Deluxe or Bacon & Cheese for a recommended price of $3.99 (price and participation may vary). The new burgers are topped with new thick-cut Applewood smoked bacon, which will now be available on all existing menu items featuring bacon, and are the first permanent menu item to include habanero peppers. Varieties range from 540 to 610 calories.

Conducted with men’s style and lifestyle network Complex Media, Flavor Battle launched in 2009 as an extension of McDonald’s 365Black initiative. McDonald’s 365Black platform was created to celebrate the pride, heritage and achievements of African-Americans year round.

McDonald’s Challenges DJs Across USA with the Launch of the Flavor Battle added by Newsroom on November 20, 2013
View all posts by Newsroom →