The app launch coincides with the release of McDonald’s third Corporate Responsibility Report and features four interactive mini-games, where visitors can learn about the societal and environmental initiatives which McDonald’s and its franchises are involved in. 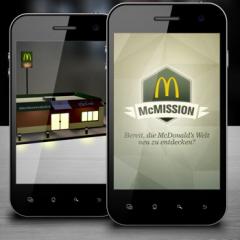 “With McMission we want to bring our guests closer though playful central aspects of sustainability,” said Philipp Wachholz, director of corporate affairs at McDonald’s Germany. “We have chosen augmented reality as a technology because it brings together the real restaurant experience with fascinating virtual animation.”

McMission games can be launched through scanning things in McDonald’s such as a box of French Fries or images in the Report, which is available at certain locations.

The four games – ‘Eco-Spinning’, ‘Origin Puzzle’, ‘Recycling Crash Course’, and ‘Waste-dunking’ – educate users on McDonald’s and conclude with a mini-quiz to drive home the information they have been presented with.