By Newsroom on May 11, 2015Comments Off on ‘Minions’ of Sales Opportunities with New Green Giant Campaign 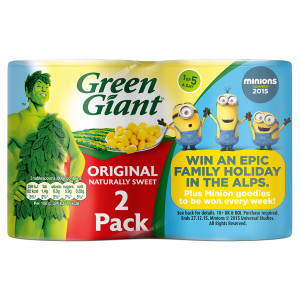 Green Giant and Universal Studios announce a new partnership and multi-channel campaign ahead of the highly anticipated release of the new Minions film this summer. The partnership begins in early May and will include a UK radio campaign with Heart FM, comprehensive digital and social media support, as well as in-store activity and a Minion Movie themed on-pack promotion.

Shoppers are sure to love the eye-catching packaging featuring the three Minion stars of the forthcoming movie. The on-pack promotion will run across the brand’s top-selling multipack skus and will offer shoppers the opportunity to enter a competition to win an epic family holiday to The Alps.

Set to further enhance the brand’s already strong positioning and increase frequency of purchase, the partnership provides the perfect platform for Green Giant to spearhead the ambient vegetable category into the 21st century, with an engaging campaign that’s relevant to today’s modern family.

“Partnering with a movie on this scale is a first for Green Giant and it provides a high-profile platform that is the ideal context to reach our target family audience. With less than two months to go, there’s already a huge buzz around its release and being associated as an official partner is sure to increase awareness and demand for Green Giant. Our creative in-store activation will also help to drive trial amongst families, and retailers can expect to benefit from increased rate-of-sale with our exciting competition.”

‘Minions’ of Sales Opportunities with New Green Giant Campaign added by Newsroom on May 11, 2015
View all posts by Newsroom →