Mintel Report Says Germans Have The Sweetest Tooth In Europe

By Newsroom on October 30, 2013Comments Off on Mintel Report Says Germans Have The Sweetest Tooth In Europe 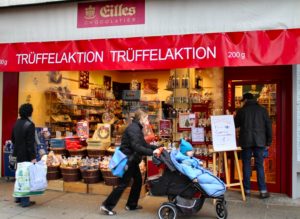 While the Western European chocolate confectionery market reached a sweet £19 billion in 2012, it looks like it is Germans who have the sweetest tooth in Europe.

Indeed, according to latest research by Mintel, Germany accounted for a quarter (24%) of the Western European chocolate confectionery market in 2012, equating to a retail market value of £4.6 billion in in 2012. And despite falling by 7% since 2010, sales are expected to grow by almost 4% by the end of 2013. Meanwhile, France and the UK each hold a 20% share of the market, with a retail value of £3.7 billion respectively in 2012. The Italian market follows at £1.2 billion and Spain £590 million.

Germany’s reputation as a “chocolate nation” is also reinforced by a per capita consumption of over 8kg annually, by far the highest in Western Europe. In comparison, Brits eat 6.5kg per year, the French 5.7kg, Italians and Spanish 1.7kg.

Marcia Mogelonsky, Director of Innovation and Insight at Mintel, said: “Germany remains Europe’s largest chocolate market, despite the small fall from 2010. In order to keep up that pace, manufacturers would do well to look at what motivates German chocolate consumers, as they have some unexpected patterns in their eating and purchasing habits. Germans have a strong tradition in the category, supported by a number of well-established and respected brands.” 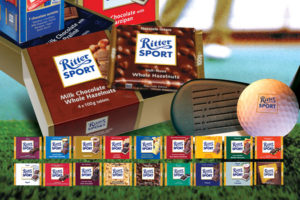 Not only are Germans impulsive chocolate buyers, but they are second only to French consumers when it comes to buying chocolate to treat themselves. Indeed, more than three-quarters (76%) of Germans and 84% of French purchase the products as a special treat for themselves, or as something special to improve their moods. Meanwhile, two fifths (41%) of Brits buy chocolate to eat it as comfort food. Just over half (58%) of Italians and 66% of Spanish chocolate eaters buy the products to lift their moods or to treat themselves.

Furthermore, satisfying a sweet craving is also one of the most popular reasons for purchasing chocolate among European consumers. Almost seven in ten (66%) Italian and six in ten (60%) German and Spanish chocolate buyers make product purchases to satisfy a sweet craving. French consumers seem to be the most likely to curb chocolate cravings, with only 36% succumbing to chocolate temptations when a sweet craving strikes. Meanwhile, 71% of Brits see chocolate as a good value treat. 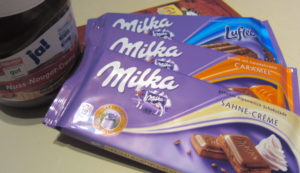 “The fact that European chocolate buyers are less likely to share presents manufacturers and retailers with a focus for chocolate positioning: increasing visibility at checkout areas in supermarkets and other outlets, as well as positioning personal-sized chocolate bars or tablets throughout retail environments could grow sales among impulse buyers.”

And in a time of financial turmoil, budgets are always front of mind for consumers. While European consumers may lean towards impulse purchases and using chocolate as a way of making themselves feel better, they are also price sensitive when making their confectionery purchases. More than a third (36%) of German chocolate consumers buy chocolate when it is on sale or special offer, compared to 32% of French consumers, 16% of Spanish and 22% of Italians.

“This suggests that while Europeans are relying on chocolate to make them feel better, part of the mood enhancement may come from finding a favoured chocolate bar at a good price. For manufacturers, the trick is to find the “sweet spot” to increase sales by positioning a product at the intersection of “good price” and “good feeling.” Marcia concludes.

Mintel Report Says Germans Have The Sweetest Tooth In Europe added by Newsroom on October 30, 2013
View all posts by Newsroom →