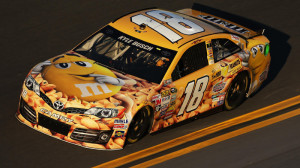 Between the mind-bending speeds, bumper to bumper action and hairpin turns, many observers would say the high-octane world of stock car racing is a little nuts. Now, for the start of the 2014 NASCAR Sprint Cup Series season, Mars Chocolate North America and M&M’S Racing are taking the nuttiness of M&M’s Peanut in NASCAR to new extremes by unveiling an M&M’S Peanut-themed paint scheme for the No. 18 M&M’S Toyota Camry on NASCAR’S biggest stage.

The eye-popping new design will pair “America’s Favorite Nut” – M&M’S Peanut spokescandy, Yellow – on the exterior of the car driven by one of the sport’s most talented drivers, Kyle Busch. The paint scheme marks the first time Yellow has made a solo appearance on the No. 18 car.

“As a driver I’m not usually a fan of seeing the color yellow during the race, but this is definitely the exception to that rule,” said Busch. “Yellow is America’s Favorite Nut, and I love having him on the car since M&M’S Peanut is my go-to snack at home or in the hauler.” 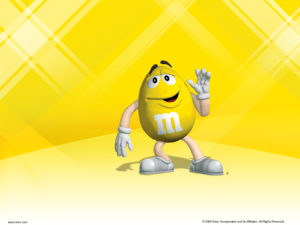 “M&M’S Peanut taking a lead position for us at the biggest race of the NASCAR 2014 racing season gives Kyle Busch fans – and Yellow fans – even more incentive to stand up and cheer,” said Seth Klugherz, Senior Director, M&M’S Chocolate Candies. “Just as there will only be one winner in victory lane, only 1 in 100 peanuts is lucky enough to make its way into a bag of M&M’S Peanut.”

The No. 18 M&M’S Peanut Toyota is the latest exciting effort in the brand’s “Year of Peanut” integrated marketing campaign, a yearlong effort to showcase the irresistibility of M&M’S Peanut. The campaign has incorporated several exciting activations, including:

Yellow was first introduced along with M&M’S Peanut in 1954. Since then, the irresistible chocolate- coated peanut has captured the hearts and “taste buds” of the nation, but he usually plays a supporting role to his best friend and fellow race fan, Red.