Molson Canadian is giving its iconic beer fridge its most Canadian makeover yet. The new beer fridge, which is featured in a recently launched television spot, and will make its public debut during the TORONTO 2015 Pan Am/Parapan Am Games in Ontario, opens once ‘I Am Canadian’ is spoken in six different languages.

Using Google’s Speech Recognition API (application program interface) and other Google technologies, the fridge is able to recognize 40 different languages, ranging from French and Mandarin, to Portuguese and Hindi. When the phrase ‘I am Canadian’ is spoken, the language used is displayed on a digital panel on the fridge. Once the fridge recognizes six different languages – which can come from multiple people – the door opens, revealing row upon row of vintage Molson Canadian cans.

“With Canada Day right around the corner and with our country only weeks away from welcoming the world at the Pan Am Games, we wanted to celebrate one of Canada’s most admired traits: its diversity,” said Chris Blackburn, Director of Marketing, Molson Canadian. “With the incredible support we’ve received from Google, we were able to create the most patriotic version of our beer fridge yet, bringing people from many different cultures together over an ice cold, Canadian beer.” 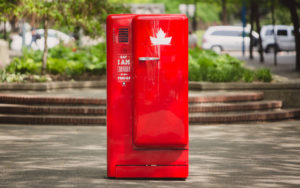 Molson Canadian’s original beer fridge earned its iconic status when it launched in 2013, and continued its upward momentum during the 2014 Olympic Winter Games in Sochi, Russia, where a Canadian passport was required to open the fridge’s door. Later that year, the fridge went through its first transformation to celebrate Canada Day, opening only when the Canadian National Anthem was proudly sung to it.

This year’s iteration, however, is the most complex yet, requiring the fridge to not only recognize dozens of languages, but also confirm that the words ‘I am Canadian’ were spoken, and do so in a matter of seconds.

“Great technology is only as powerful as the creative idea that powers it,” said Adam Green, Creative Agency Lead at Google Canada. “Google APIs helped make it happen, but at the heart of this campaign was a brilliant concept connecting Molson Canadian to the consumer. It’s proof that great creative executions are achievable when you include digital as part of early strategic thinking.”

“Google was the only company that had the language recognition application to make this vision a reality, and as we discovered, it’s also the best, most broad and accessible application we’ve ever worked with,” added Blackburn.

As the exclusive beer and cider supplier of the TORONTO 2015 Pan Am/Parapan Am Games, Molson Canadian will be showcasing the beer fridge at its Molson Canadian House located within the CIBC Pan Am Park on the Canadian National Exhibition grounds between July 11 and July 25.