By Newsroom on January 20, 2016Comments Off on Mtn Dew Kickstart Expands Product Lineup with New Flavours 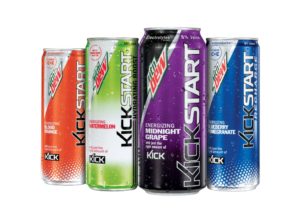 Every can of Mtn Dew Kickstart fuses three awesome things – an energizing blast of Dew with real fruit juice and a kick of caffeine – and the brand introduced four new bold flavours to the lineup – Midnight Grape, Watermelon, Blueberry Pomegranate and Blood Orange.

“Since the brand’s introduction in 2013, Mtn Dew Kickstart has been an incredible success – one of our most exciting innovations of the past decade – and we’re continuing to give guys the bold new flavours they’re asking for with the introduction of Midnight Grape, Watermelon, Blueberry Pomegranate and Blood Orange,” said Greg Lyons, senior vice president of marketing, Mountain Dew.

In conjunction with the release of these new flavours, Mountain Dew will build upon its “It All Starts With a Kick” campaign, launching a robust 360 degree marketing program including engaging digital and social media, broadcast and out of home advertising, merchandising and experiential activations. And, for the first time since 2000, Mountain Dew will return to the Super Bowl with a hilarious TV ad that combines fan-favourite ad elements and is guaranteed to have fans talking.

The new flavours are available at retailers nationwide in the US, beginning on January 25, 2016.