A 30-second version of the ad from Wieden + Kennedy in Portland will air during the Grammy Awards broadcast on CBS. McEntire replaces the ‘Value Colonel Sanders’. 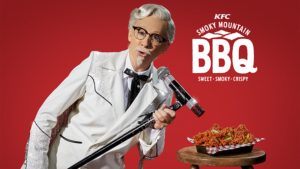 “[The creative team] wrote everything, the script and the music,” McEntire told Adweek. “I thought they did a wonderful job on it all. We had fun with it. I’d go in and sing it my way and they’d laugh and say for me to do it this way, and we’d all laugh.”

McEntire said she was “spellbound” in December when she was asked to be the first woman and first musician Colonel Sanders and that she enjoyed the way she was able to “portray what I do for a living as the Colonel.”

“With Reba’s southern roots and entrepreneurial spirit, she truly embodies the values of the Colonel and the crowd-pleasing flavour of our Smoky Mountain BBQ,” said Andrea Zahumensky, CMO, KFC U.S., in a statement.

The new flavour will be available at participating KFC locations on Jan. 29.

McEntire said it was hard at first to sing while wearing the costume, goatee and moustache. 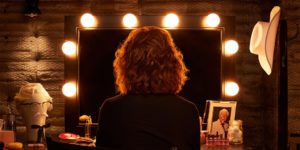 “It took a while to get used to it because when they put it on me, it was glued on my upper lip, and then when you smile, that stretches out,” she said. “So we kept gluing it back on.”

She continued: “I got a big kick out of the transformation and wearing the wig. The hardest part was when they said to me, ‘We want you to eat this piece of chicken while you’re the Colonel,’ and I looked at them and I looked at the band and they had moustaches and I said, ‘How do y’all eat with the moustache?’”

McEntire is in four spots for KFC, with the potential for a fifth appearance, according to a rep for the brand. McEntire noted that it “would thrill me to pieces to continue it on.”