By Newsroom on April 23, 2014Comments Off on Mysterious Doritos Flavours Appear In Stores As Brand Unveils ‘Bold Flavour Experiment’ 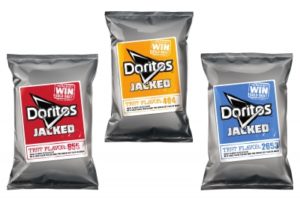 The fan challenge: if you’re bold enough, try all three mystery flavours and vote for your favorite here. As part of the promotion, bold taste testers will be rewarded for voting, with the flavour receiving the most fan votes ultimately being brought back to store shelves this fall. All three bold flavour names will be revealed later this summer.

Introduced in 2012, Doritos Jacked is everything fans love about Doritos tortilla chips, only jacked up for a bigger and bolder experience. Forty percent bigger in size and thickness, the chip delivers a one-two punch of intense flavours followed by a twist of spice or tanginess that packs the ultimate crunch. For its Bold Flavour Experiment, the Doritos brand will reward those who vote for their favourite Doritos Jacked mystery flavour with daily giveaways of $1,000 — in gold. The “Be Bold, Win Gold” prizing celebrates the origin of the Doritos name, which translates to “little bits of gold” in Spanish.

“There’s nothing as bold as stepping into the unknown, and crunching into an unknown mystery chip with over-the-top flavour is one way we’re inviting fans to be bold with the Doritos brand,” explained Ram Krishnan, vice president of marketing, Frito-Lay. “Our Bold Flavour Experiment is the latest example of how we’re rewarding our fans for making bold choices — this time by trying our mystery Doritos Jacked flavours and voting for the bold flavor they like best.” 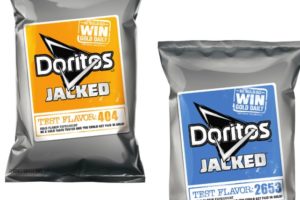 The Bold Flavour Experiment builds on the Doritos “For the Bold” global marketing campaign that celebrates the brand’s legacy of empowering its fans to seize the moment and live boldly. Over the years, the Doritos brand has done everything from turning over its commercial airtime so fans can crash the Super Bowl with their homemade advertisements, to most recently rewarding fans with the ultimate concert experience if they completed a series of challenges known as “Bold Missions.”