By Newsroom on December 1, 2016Comments Off on Napoleon Dynamite and Pedro Reunite in a Hilarious New Burger King Tater Tots Ad

Twelve years after Napoleon Dynamite won our hearts with his dexterous dancing skills in the film that shares his name, he’s teaming up with his old pal Pedro to make a commercial for — what else? — tater tots.

Following the “Whopperito” and those infamous Cheeto chicken fries, Burger King is now offering cheesy tater tots and they enlisted Napoleon Dynamite (Jon Heder) and Pedro (Efren Ramirez) to recreate their memorable cafeteria scene from the movie in one of their restaurants.

In the clip, Heder asks Ramirez for one of his tater tots before proceeding to steal all of his tots; unfortunately for us, Heder doesn’t put them all in his pocket as Napoleon did in the film. 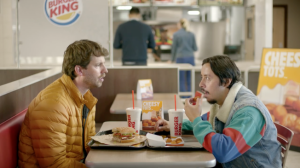 The point, of course, is to let consumers know that their demands for the return of Cheesy Tots have been heard.

“Fans have been craving the return of Cheesy Tots for some time now,” Alex Macedo, president of North America at BK, said in a statement. “So we wanted to give loyalists a holiday surprise after we heard so many of their requests. Now they’ll be able to warm up to these cozy cheese and potato bites this holiday season.”

The 30-second spot, from agency Code and Theory, employs the same kind of dumb yet charming delivery that made the film a hit. 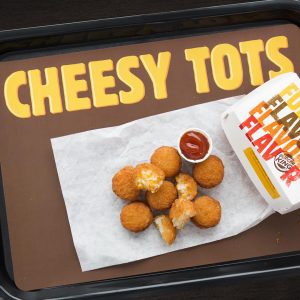 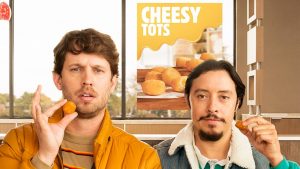