By Newsroom on April 4, 2013Comments Off on Nestlé Celebrates A Century In Japan 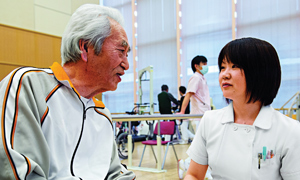 Nestlé Japan is marking 100 years in business, its success driven by its ability to adapt its global brands to meet local consumers’ needs.

As the company begins its second century, Nestlé Japan is responding to the needs of Japan’s growing elderly population with innovative products.

Recent statistics by the Japanese Health and Welfare Ministry revealed that Japan’s population of 128 million will fall by more than a third by 2060, and about 40% of the population will be over the age of 65.

“Japan faces specific challenges with its ageing and shrinking population,” said Kozo Takaoka, President and Chief Executive Officer of Nestlé Japan. “In many ways Japan is experiencing the challenges we will eventually face elsewhere.

“Innovation is key and as we have seen over the past years, Nestlé Japan is capable of finding innovative ways to meet this new reality.” 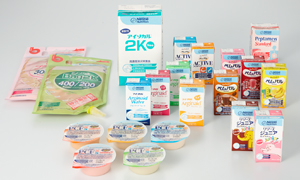 Nestlé Health Science in Japan, a unit of Nestlé Japan, has launched its ‘Heart-full Care Program’ in 2009 to offer products and nutrition-related consulting services online and via its call centre to people who receive in-home care and care providers in the country.

One of its brands Isocal offers Japanese consumers Isocal Arginaid, an adapted nutritional product for inactive people who suffer from bed sores, which has been used in Japan for several years.

The research unit, part of Nestlé’s Research and Development Center in Switzerland, is based at the University of Tokyo, and focuses on research in nutrition and health.

The collaboration was further strengthened by a joint research programme ‘Food for Life’ in the same year.

Nestlé in Japan has widened its appeal to Japanese consumers of all ages by launching unusual KitKat flavours such as black sugar and roasted soy bean flour, wasabi, green tea, cola and lemon soda, and European cheese.

KitKat was first sold in the country in 1973. Nearly 20 years later Nestlé Japan started production of KitKat at its factory in Kasumigaura, Japan.

Until now Nestlé Japan has launched more than 200 different KitKat varieties in its confectionery range.

Specific to the area 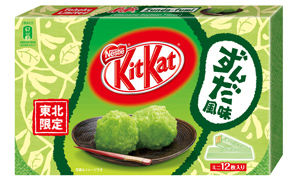 The company produces speciality and seasonal KitKat bars, which are only available in certain regions of Japan and use flavours specific to the area.

For example, KitKat Zunda is a creamy soy bean paste flavour, particular to the Tohoku region.

In the Tochigi area, KitKat Tochiotome uses a variety of strawberries from the area, and around the Kyoto, KitKat Maccha includes green tea made by Kyoto’s tea makers.

Nestlé has also acknowledged the traditional custom of giving KitKat bars as tokens of good luck in Japan.

The tradition, based on the name KitKat sounding similar to the Japanese phrase ‘Kitto Katsu’, which means ‘surely win’, sees Japanese well-wishers present the chocolate to their friends and loved ones every year, especially for school entrance exams.

In 2009, the brand partnered with Japan Post to create KitKat Kit Mail – specially-packaged bars containing the chocolate bar and space for a message.

Kit Mail was the first ever ‘post-able’ chocolate in the world sent via post.

Only of its kind 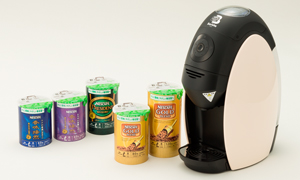 Nescafé instant coffee was first produced in Japan in 1966 at its Himeji factory after it was launched in Switzerland in 1938.

In the 1960s, other Nescafé products such as Nescafé Gold Blend were also made available in Japan, which triggered the construction of another soluble coffee factory in the city of Shimada in 1973.

Nescafé Barista, which is available exclusively in Japan, was developed in 2009 as the only “at-home coffee by the cup” system of its kind that uses soluble coffee.

Nestlé started its operations in Japan after the company and the Anglo-Swiss Condensed Milk Company opened a branch in the southern city of Yokohama, eight years after the two organisations merged in Switzerland in 1905.

Japanese consumers were able to buy Nestlé products such as condensed milk and milk food. In 1922, the branch moved to the city of Kobe, south-west of Japan.

Nestlé in Japan has expanded its operations over the decades offering Japanese consumers brands such as Maggi, Milo, Nestlé Krematop and Nestlé Purina PetCare products such as Purina One and Friskies.

Today the company employs about 2,200 people in Japan and operates three factories. Japan is one of Nestlé’s 15 biggest markets worldwide. Its annual sales in 2012 total more than CHF 1.8 billion.

“Japan was the strongest performer amongst the developed markets in Asia, Oceania and Africa in 2012, with Nescafé Dolce Gusto and KitKat as highlights,” said Nandu Nandkishore, Nestlé’s Head of Zone Asia, Oceania, Africa and the Middle East.

“Nestlé is a truly global company. At the same time, it is also a very local company. We are close to our consumers. We are part of the communities we live in. And in the end – food is local.”

Nestlé Celebrates A Century In Japan added by Newsroom on April 4, 2013
View all posts by Newsroom →