By Newsroom on May 10, 2016Comments Off on New Burger King Bot Takes Your Orders on Facebook Messenger

Fast food giants Burger King have launched a new bot which enables the customer to place their order through Facebook messenger. 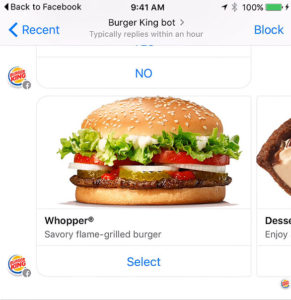 While various global companies in a variety of industries (such as eBay, Expedia and UNICEF) have already launched their own Facebook messenger bots, Burger King are the first big name in the food industry to experiment with this before now, untapped area of commerce.

If the execution of the concept is as seamless as it appears to be in the promotional video, they may well be followed by many more.

New Burger King Bot Takes Your Orders on Facebook Messenger added by Newsroom on May 10, 2016
View all posts by Newsroom →