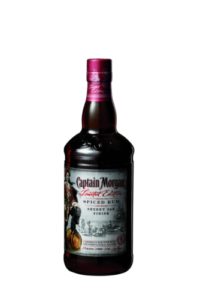 In 1671, Captain Henry Morgan led a historic invasion off the shores of Panama. Though five of his ships were lost on the bottom of the Caribbean during this battle, including his flagship The Satisfaction, Morgan earned his mark in history as one of the most renowned privateers of all time.

After almost 350 years, remains of a 17th century fleet, including a hull of a ship, a sword and a barrel, were discovered in 2012 as part of an expedition funded by the Captain Morgan brand. To commemorate Morgan’s legendary battle as well as the recent historic discovery, Captain Morgan announced the release of its limited edition Captain Morgan Sherry Oak Finish Spiced Rum.

With a growing demand for sherry flavored spirits in the marketplace, the limited edition Captain Morgan Sherry Oak Finish Spiced Rum is finished with Sherry Oak, which results in a rich and flavorful take on the brand’s signature blend. The new limited time offering possesses a smooth yet subtly sweet taste of oak, sherry wine, vanilla, caramel, dark cherry and cocoa, with a slight floral undertone.

Through the brand’s funding of the archaeological expedition and its ongoing commitment to tell the story of the real-life privateer, researchers have been able to derive additional details from the recovered artifacts, which provide a more holistic understanding of what life may have been like for Morgan on the high seas in the 17th century.

One such detail is that the recovered barrel most likely housed sherry, considering it was a prominent export during the time – a detail that ultimately led to the creation of the brand’s limited edition offering.

“The life and legacy of Henry Morgan serve as an integral source of inspiration for us as we continue to develop innovative product offerings and creative marketing campaigns,” said Jesse Damashek, Director of Innovation, Diageo North America.

“Every adventure, and especially every victory, is one worth celebrating responsibly, and we are proud to offer adult consumers Captain Morgan Sherry Oak Finish Spiced Rum for a limited time.”

The limited edition Captain MorganSherry Oak Finish Spiced Rum possesses a unique bottle design with a highly-detailed, metallic label. As the liquid leaves the bottle, commemorative artwork and a synopsis of Morgan’s 1671 battle are revealed on the backside of the label.