By Newsroom on July 10, 2017Comments Off on New Outdoor Drinking Terrace Comes to Stratford 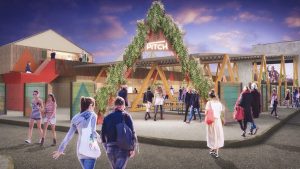 PITCH, a unique, open-air cinema, drinking terrace and street food venue is coming to Stratford in July, 2017. The ambitious new space is a design-led project by creative and outdoor ‘fun-architects’ ZAP Architecture, and promises to become a destination venue not only for the thousands of people who have flocked to the former Olympic Village, but for East Londoners and those from further afield.

The project will be able to host 400 sun-worshippers beneath its 80’s/90’s inspired canopy which features break- out areas including retro pyramid booths and an outdoor cinema screen, where movies including BIG, Coming To America and The Truman Show will be aired on Mondays, Wednesdays and Sundays throughout the summer. 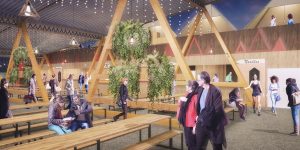 Pol Gallagher, owner of Zap Architecture says: “Stratford has undergone an incredible transformation since the London Olympics, and there are thousands of locals living in the area who commute to, and party in, central London every day. We felt it was about time we gave the locals the entertainment they deserve in their area, while also giving ‘visitors’ a reason to come and experience Stratford for themselves. 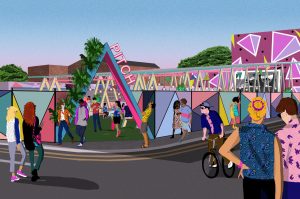 Pitch is a feel-good, outdoor venue with a nod to the past. There’s a celebration of retro styling, with 80s party booths and bright colours throughout the venue – as well as our favourite old films playing in the cinema space – but more than anything this has been a project led entirely by design.”

Guests will enter through an incredible, custom-designed triangular ‘garden arch’, where they’ll be welcomed into a retro-themed space with an expansive sun terrace, wall art, party booths and an explosion of vibrant colours.

As the mouthwatering scent of street food from stalls including Piadina Project, Kalimera, Gyoza Guys and Ticos Hotdogs wafts across the summer breeze, visitors can relax on pre-booked tables or kick back with an ice cold beer or cocktail on the bean bags in the venue’s cinema area. 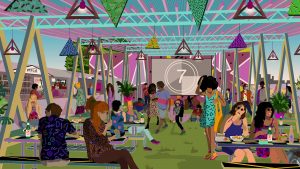 A perfect place to unwind with friends or escape the hustle and bustle of the nearby Westfield Shopping Centre, Pitch will be a free-entry oasis of calm in one of London’s most rapidly-changing boroughs.

And you won’t need to worry about getting home, either – within a stone’s throw of Stratford High Street station, Pitch offers Londoners an exciting new drinking space less than 20 minutes from London Bridge, Canary Wharf, Bank, Camden or Shoreditch. Pitch is a 4 minute walk from Stratford station.