By Newsroom on March 19, 2014Comments Off on New Pringles Tortillas Give Partygoers The Choice To ‘Dip ‘Em Or Don’t’ 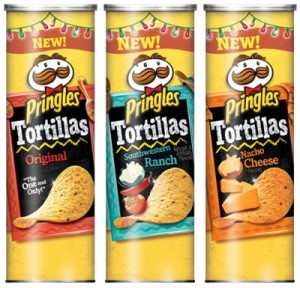 While competitive bracket pools are known to be one of the key activities at a basketball tourney party, a recent survey commissioned by Pringles found that a variety of tasty snacks is the most important thing to make the party a success. And, 83% of respondents ages 18-24 say chips and dip score a spot on the menu when hosting a basketball viewing party—18% more than Buffalo wings and nearly three times as much as pigs in a blanket. Surprisingly, only half of men and women surveyed said that the actual games were their favorite part of a basketball viewing party.

“Pringles Tortillas are the brand’s first new product since Kellogg Company acquired it in 2012, and this launch represents the first time that Pringles is introducing a tortilla chip,” said Raj Joshi, vice president of Savory Snacks at Kellogg. “Pringles Tortillas are a unique chip that can be dipped, but like original Pringles, are delicious on their own.”

“Basketball viewing parties bring out the fun in the game and let fans root for their teams as if they were at the tourney in person,” said Johnson. “I’m excited to partner with Pringles Tortillas to introduce a chip as iconic as the tournament.” 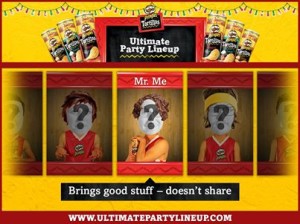 Other findings from the Pringles Tortillas survey include:

New Pringles Tortillas Give Partygoers The Choice To ‘Dip ‘Em Or Don’t’ added by Newsroom on March 19, 2014
View all posts by Newsroom →