By Newsroom on April 11, 2016Comments Off on New SW London Steak & Liquor Bar Set to Champion the ‘Hanger’ Steak 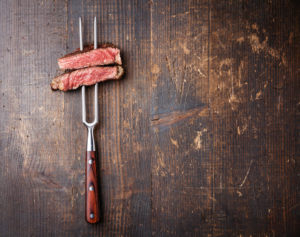 This summer, a cutting edge steak and liquor bar concept that champions the unsung hero of the meat world, the hanger steak, will open in south-west London. On a mission to bring steak ‘stripped back’ at affordable prices with simple, seasonal and locally sourced ingredients, Hanger SW6 is set to become the neighbourhood’s new gem of choice.

Located over two floors in the heart of Fulham Broadway, the 60-cover restaurant and downstairs liquor bar will offer the perfect setting for any social occasion, with a natural progression downstairs over the course of the evening where guests will enjoy the simple but carefully curated cocktail menu. Hanger SW6 will serve lunch and dinner, with an American-inspired brunch at weekends with the signature dish of Steak & Eggs.

The first solo venture from restaurateur Patrick Falla, the Hanger project is the culmination of over ten years’ work and research in the hospitality industry. Falla has worked with several of the biggest names in the industry, including D&D and JW Marriott, and his experience of large-scale outdoor bars and events with Live Nation & AEG Europe has made him as equally passionate about drinks, hence the liquor bar concept.

The kitchen at Hanger SW6 will be headed up by chef James Burton, and the star of the show will be the hanger steak, a relatively overlooked cut of beef. Also known traditionally as the ‘butcher’s cut,’ since butchers liked it so much that they often kept it for themselves instead of selling it, hanger steak packs a huge amount of savoury flavour akin to a rib-eye, but without the wallet-emptying price tag. Supplied daily by Hixson’s of Smithfield, steak will be around £10 per person or £20 to share. The menu will also feature the Hanger Steak Sandwich, served with Sticky Onions, Watercress, Mustard & Ciabatta.

Hanger SW6 will also serve up small plates and sides such as salt and vinegar squid and for pudding, treats such as Hanger Sundae made with Meringue, Fruit Curd, Vanilla & Lemon Pie Ice Cream and a Chocolate Orange Brownie & Cornflake Ice Cream will feature.

The downstairs liquor bar will serve cocktails such as The Perfect Storm, a rum and ginger based old-fashioned style cocktail and the Chelsea Sidecar created using Sipsmith gin infusions. Hanger SW6 will champion local and independent suppliers: Sipsmith is also based in Hammersmith & Fulham, as is Freedom Beers, who first opened their award-winning brewery in the local area. The drinks list has been meticulously created with an emphasis on cocktails and a short, but innovative wine list and there will also be a well-crafted bar food menu to match.

The décor at Hanger SW6 will be stylish and relaxed, featuring distressed walls, retro wood and a partially open kitchen offering a touch of theatre to the restaurant. The venue aims to make guests feel relaxed, giving them a sense of being in a ‘home away from home’. The interior and lighting of Hanger will be adaptable, enabling a gradual transformation from casual, relaxing brunch and lunch spot by day into a chic and colourful evening space by night.