By Newsroom on May 9, 2017Comments Off on New York Bakery Co. Reveals New and Improved Bagel Thins Range 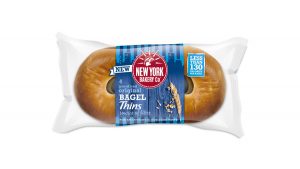 New York Bakery Co., one of the UK’s largest bagel producer, has revamped its popular Bagel Thins range in a move to encourage more shoppers, looking to reduce the carbs from their diets, into the Morning Goods category.

The two-strong range of new-look Bagel Thins four-packs, will be available from May 2017 in Original and new Cinnamon & Raisin, an extension of the second best performing full-size bagel SKU.

Featuring a new and improved recipe, each Bagel Thin provides a source of fibre and contains less than 130 calories. This creates the perfect snack or a lighter breakfast option that doesn’t compromise on the authentic soft and chewy New York taste and texture of the core New York Bakery Co. brand.

The range also features an extended life of 10 days to fit with the busy lifestyles and dining habits of younger, smaller household consumer groups – which represent a significant 15% of total Morning Goods spend.

Amy Page, Head of Marketing at New York Bakery Co. said: “2017 is going to be a massive year for New York Bakery Co. and the relaunch of Bagel Thins is just the beginning. Shoppers told us they would buy more bakery items if they were lighter and smaller portions, offering fewer but better carbohydrates, with added benefits such as being a source of fibre.” 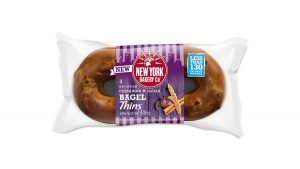 “We’ve delivered this with a new and improved Bagel Thins recipe that doesn’t compromise on all the taste and versatility of our core range. It’s the perfect lighter bite. That’s why in a recent blind taste test, the new recipe scored an incredible 69% preference versus a leading competitor brand. As the only company to produce authentic New York style bagels, boiled and then baked, we are in a position to really drive category growth by working with retailers to offer shoppers a real taste of New York life,” added Amy.

The New York Bakery Co. Bagel Thins will be available in Asda, Waitrose, Ocado and via Amazon Fresh with an RSP of £1.00 for a pack of four.

The relaunch comes on the back of total ambient bakery sector bagels sales worth £74.4m. Of this, Bagel Thins value sales made up £12.1m with an increase of 83.8% value change YOY. The new-look range is designed to bring consumers that are moving from other baked goods into alternative Bagel Thins.

The New York Bakery Co. holds an 80.2% value share of the ambient bagels market and is delivering sales of over £59m, growing at a rate of 2.4% YOY.