By Newsroom on September 15, 2016Comments Off on Nissin Foods USA Makes a Historic Recipe Change to Improve its Iconic Cup Noodles

Nissin Foods, the inventor of instant ramen, announced a significant recipe change for its iconic Cup Noodles brand in the US. For the first time in its recent history, the beloved noodle brand is taking a step forward in improving its nutritional makeup by reducing sodium, removing added MSG and removing artificial flavours.

Celebrating the 45th anniversary of Cup Noodles, Nissin is making thoughtful nutritional changes to its product while maintaining a great taste fans love – all at the same, affordable price.

“Listening to our consumers has always been at the core of what our company, and the Cup Noodles product in particular, was founded on,” said Al Multari, president of Nissin Foods USA.

“Most recently, we asked our consumers what changes they’d like to see in our Cup Noodles product. They told us that without sacrificing taste, the three most compelling changes we could make to our recipe were: lower sodium, no added MSG and no artificial flavours. This is exactly what we’ve been able to accomplish. Our consumers rely on Cup Noodles as a convenient, affordable and quality meal to help keep them going – and now, they can feel even better about eating it.” 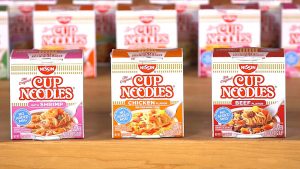 For almost 60 years Nissin has offered innovative, satisfying products with a wide range of flavours. Invented in 1958 by Momofuku Ando, who was inspired by the hungry masses he witnessed after World War II, ramen has become an affordable, delicious quality meal or snack that consumers love. Keeping the importance of taste and cost in mind, Nissin challenged its research and development team to accomplish the task to help address today’s modern preferences for this ramen product.

After a series of blind taste tests with people who frequently consume the product, results revealed that consumers liked the new version of Cup Noodles just as much as the current. Nutritional changes include:

Nissin is committed to providing its consumers with a delicious, affordable meal and is constantly evolving its products to align with consumer preferences. With this recipe change, consumers can be assured that they are receiving a product that meets their expectations of a delicious taste and an improved nutritional recipe.

Consumers can now find the new product on store shelves nationwide. With this new Cup Noodles lineup, the brand will also launch its first-ever US national advertising campaign in November 2016.