By Newsroom on July 17, 2015Comments Off on ‘Nude’ Baristas Serve Up Coffee To Promote Nestlé’s All-Natural Creamer

As part of Nestlé’s ‘Coffee-Mate Natural Bliss’ all-digital campaign, the brand took over an Irving Farm Coffee Roasters store in New York for one day in April, providing coffee that contained the creamer on the house.

Instead of being served by regular baristas however, customers were greeted by ‘nude’ servers dressed only in body paint.

Codie Richards, shopper marketing manager at Nestlé, explained on Adweek: “We know that consumers want something natural in their creamer. So what better way to talk about it and make some noise?”

Together with its agency 360i, the Nestlé team camped out in the basement of the coffee shop to observe the reactions of patrons. 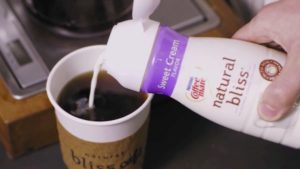 Pierre Lipton, chief creative officer at 360i, mentioned that identifying the locals from the tourists was easy.

“The New Yorkers were more shocked that the coffee was free than by the naked people making it. They casually took in that the people were naked and then found out their drink was complimentary, and they were like, ‘Really?’”

Like what Michael Nuzzo, group creative director at 360i, said, “Nobody really sits around and thinks about coffee creamer.”

The idea definitely garnered attention, perhaps a tad too much such that distracted clientele had to ask the baristas to repeat their explanation of the creamer’s unique selling point.

‘Nude’ Baristas Serve Up Coffee To Promote Nestlé’s All-Natural Creamer added by Newsroom on July 17, 2015
View all posts by Newsroom →