By Newsroom on March 20, 2015Comments Off on Oreo Takes Advantage of Solar Eclipse in #Oreoeclipse Campaign 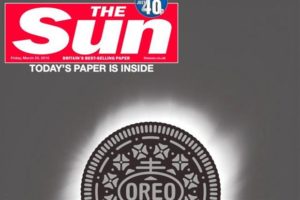 Oreo has launched a campaign to coincide with March 20 solar eclipse to amplify its current global push Play with Oreo.

Conceived and planned by media agency PHD and out of home company Talon, the activity, which spans a number of different media formats, plays on the eclipse to show life through an ‘Oreo’ lens as the Mondelez-owned brand attempts to shift perceptions of Oreo from a biscuit you can play with, to a playful brand.

The largest scale element of the #Oreoeclipse campaign will see the production of the first-ever translucent cover wrap of The Sun newspaper.

The wrap will be printed in black to ‘eclipse’ the publication and two special eclipse-themed, translucent Oreo ads will also appear in the paper itself. The cover and ads have been created by Oreo’s global advertising agency FCB and content agency Drum. 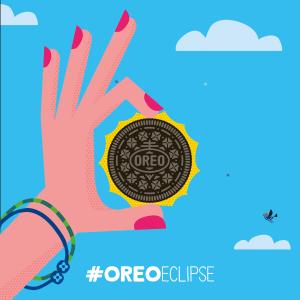 The wrap will appear around more than two million copies, which will be distributed across 50,000 retailers. Oreo will also take over thesun.co.uk for the day.

Jonathan Holden, Oreo marketing manager, said: “We want Oreo to be an even more iconic brand in the UK. Playfully putting it at the centre of a moment where the whole country will be looking in the same direction makes this idea the perfect fit with that ambition.”

In addition, digital outdoor in London and Edinburgh will use data from the Royal Astronomical Society and TimeAndDate.com, to track the movement in the sky and mirror it with Oreos to create a simultaneous Oreo eclipse in the outdoor ads themselves.

Oreo Takes Advantage of Solar Eclipse in #Oreoeclipse Campaign added by Newsroom on March 20, 2015
View all posts by Newsroom →