By Newsroom on November 28, 2018Comments Off on Original Sin Cider Launches a Series of Unfiltered Single Varietal Ciders 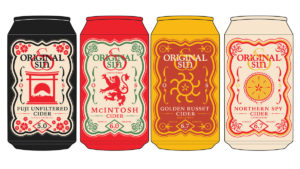 Original Sin Hard Cider is pleased to announce the upcoming release of a series of unfiltered single varietal ciders made with freshly pressed New York apples.

These ciders will allow consumers to experience the unique flavour characteristics of a range of classic apples. The first of the series – Original Sin Unfiltered McIntosh Cider – will be available in early December 2018.

Original Sin has selected four iconic apples for the launch of this new product line. Each of the chosen apples has a long history of being grown in the Finger Lakes and Hudson Valley regions of New York State. New York is the second-largest apple producing state and boasts the most diverse selection of apple varieties in the country.

In the early 19th Century, John McIntosh noticed a young apple tree growing on his property in Ontario, near the US border. Delighted by the delicious fruit produced by the tree, he sold seeds to his neighbours hoping to popularise this new type of apple.

It took him years to realise that apples do not grow true to seed and that varietal propagation could only be achieved through grafting. Today the McIntosh is commonly grown in Canada, New England and Michigan, in addition to New York. The aromatic McIntosh with a distinct white flesh and a vinous flavour is coveted for fresh eating and cider production.

Notably, Apple’s Macintosh computer is named after this well-loved apple.