By Newsroom on January 24, 2013Comments Off on Pepsi To Distribute Fruit Shoot In USA 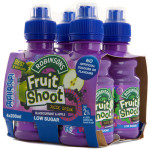 Britvic are set to take their popular children’s drink Fruit Shoot to the USA. The British drinks company struck a deal with PepsiCo to distribute the product to 30 American states, following a successful trail run in nine of the proposed 30 destinations.

The deal follows a similar agreement by the two parties earlier this year, which would see Pepsi distribute Fruit Shoot in Spain.

As well as announcing the two distribution deals Britvic has revealed its first quarter trading performance with group revenue up by 4.8 per cent to £303.2 million, with strong growth in average price realised.

This marks a tremendous turnaround for the company who saw it’s profits plummet last year, due to Fruit Shoot’s faulty cap saga. It said production levels of the drink were now back to historic levels seen before the cap crisis.

The drinks group, which makes and sells PepsiCo brands in Britain and Ireland, is currently waiting for approval from the Office of Fair Trading on its merger with Irn-Bru maker AG Barr.

Pepsi To Distribute Fruit Shoot In USA added by Newsroom on January 24, 2013
View all posts by Newsroom →