By Newsroom on July 15, 2014Comments Off on PepsiCo Celebrates Best Of Baseball At MLB All-Star Game 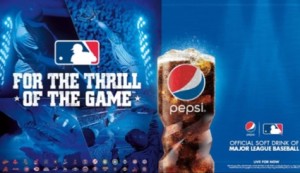 PepsiCo will hit another grand slam at this year’s 85th Major League Baseball All-Star Game at Target Field to celebrate with players and fans in the Minneapolis region. PepsiCo, a more than 15-year partner of MLB, is the exclusive non-alcoholic beverage, sports fuel and salty snacks sponsor of the league.

“All-Star Week is a huge event for many of our brands and we are excited to join MLB to make this year even bigger and better,” said Justin Toman, Director, Sports Marketing, PepsiCo. “The PepsiCo family of powerhouse brands will activate in a variety of ways—from hydrating athletes in the dugout with Gatorade to bringing a once-in-a-lifetime Pepsi ‘Real. Big. Summer.’ viewing experience to fans to sampling our popular Lay’s Potato Chips. PepsiCo will be on hand to serve athletes and fans alike during the game.”

“PepsiCo has been a tremendous supporter of Major League Baseball for nearly two decades, and we’re thrilled to see them activate so heavily around MLB All-Star Week,” said Chris Marciani, Vice President, National Sales & Sponsorship, Major League Baseball. “We are particularly excited to see Pepsi take a leadership role in the new MLB All-Star Summer Pepsi Block Party, which promises to create a festive atmosphere for fans on their way into Target Field this week.” 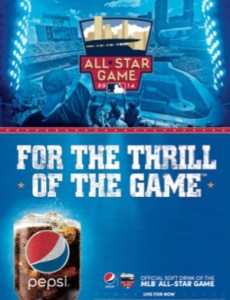 A variety of PepsiCo’s food and beverage brands are activating around the MLB All-Star Game:

In addition to exclusive rights within the non-alcoholic beverage, sports fuel and salty snack categories, PepsiCo brands currently sponsor more than half of the MLB teams and have over a dozen MLB athletes on its roster.

PepsiCo Celebrates Best Of Baseball At MLB All-Star Game added by Newsroom on July 15, 2014
View all posts by Newsroom →