By Newsroom on August 30, 2016Comments Off on Pizza Hut Kicks off American Football Season with New Flick Football Box

This NFL season, Weber Shandwick and Pizza Hut are thinking outside the box. Literally.

Available from August 30, Pizza Hut is unveiling an all-new pizza box that features a playable Flick Football Field on top, including goal posts, football triangles and a score card. The box is available with the purchase of any medium pizza, including a one-topping medium pizza off the $5 Flavour Menu. 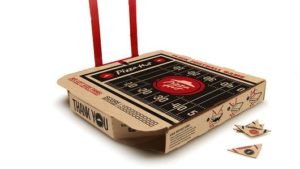 Pizza Hut is also introducing the Pizza Hut “Flick Football Challenge,” a game that invites fans to share videos of their flick football abilities for the chance to win free pizza from the $5 Flavour Menu.

With the new campaign, fans can participate in weekly challenges including longest flick, most consecutive made flicks, most creative flicks and more by posting videos of their flicking talents on Twitter, tagging @PizzaHut and using the hashtag #PizzaHutHut.