By Newsroom on July 3, 2017Comments Off on Pork Farms Launch New TV Ad Campaign for 2017

Last year was the first time the brand had advertised on TV in over 10 years and it is sticking with this medium with a run of 30 and 10 second adverts throughout July. Debuting across Channel 4 and ITV during popular programmes including Emmerdale, The Handmaid’s Tale and Ackley Bridge, the ad puts the emphasis on the great British outdoors following filming at locations across Snowdonia and Anglesey.

Paying homage to the brand’s ethos of supporting the ‘best of British’, the advert builds on the familiarity of the previous campaign which celebrated the UK’s beauty spots and hidden gems, and is part of a strategic above the line campaign which is also under-pinned with digital activity, on pack promotions and PR. 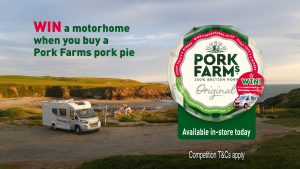 Michael Holton, brand marketing manager at Pork Farms said: “The ad campaign is part of our huge drive to support our in-store promotional campaign where we are giving away an estimated £10m of prizes including a £45,000 motorhome. With this extra advertising support we should create a major buzz during a key trading period in the category and we look forward to seeing the results and impact this has for retailers. Taking Pork Farms back to the small screen was a bold move but one that paid dividends for the brand last year and to be back for a second consecutive year in conjunction with the on-pack promotion highlights our standing in the sector as producers of the nation’s favourite pork pie.”

The humorous 30-second family holiday-themed advert finishes by highlighting the ‘Great Summer Giveaway’ competition where prizes are on offer with every promotional pack purchased.

Prizes include everything from the motorhome to free holidays or money off a Haven holiday, more details can be found here.