By Newsroom on November 19, 2015Comments Off on Quaker Celebrates 100th Anniversary of Iconic Oats Canister 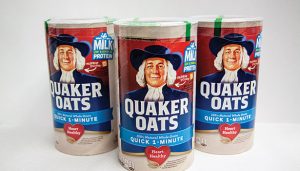 One-hundred years ago, Quaker proved that it’s hip not to be square with the introduction of the now-iconic round Quaker Oats package. A first in the industry, it was just one of many moments in Quaker’s long-standing history of innovation. While the packaging design has since been updated, the round canister can still be found on store shelves today, helping The Quaker Oats Company, a subsidiary of PepsiCo, deliver more than 350 million pounds of oatmeal and inspire countless cooking and baking oat-casions for consumers each year.

“Over 138 years ago, Quaker defined the hot cereal category, and we’ve continued to grow and innovate thanks to the power and wholesome goodness of oats,” said Becky Frankiewicz, senior vice president and general manager, Quaker. “At our core, we are oat millers here at Quaker, which has helped drive our leadership in the industry for more than a century.”

Henry Crowell, who purchased the Quaker Mill in Ravenna, Ohio, and with it the Quaker brand name, is credited for the canister debut. Canned foods were a hot new trend in 1915, and Crowell noticed the public’s growing appetite for colorful, conveniently sized packaging, so he began selling his oats in distinctive round cardboard cartons decorated with the brand’s trademark image. Today, Quaker produces approximately 120 million canisters annually at its Cedar Rapids plant. 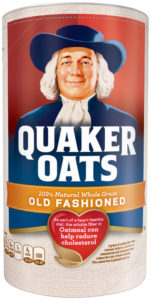 Throughout its 138-year history, Quaker has enjoyed many additional firsts. In 1891, Quaker was the first to feature a recipe on packaging – Oatmeal Bread – and in 1908, introduced the first cookie recipe on a package – Oat Cakes. Today’s Vanishing Oatmeal Raisin Cookies recipe remains a consumer favorite, celebrating 20 years on the canister in 2015. For those seeking additional recipe inspiration for the upcoming holiday season, Quaker’s online recipe database features oat-spired recipes for all occasions, including festive treats such as Oatmeal Gingerbread Cookies, Christmas Granola and Holiday Cookie Surprises. Bonus: the Quaker Oats canister makes a great vessel for cookie gifting!

As the brand has evolved, so too have consumers’ oat-consumption habits. In 1922, the company introduced Quaker Quick Oats, one of America’s first convenience products, and also a common swap for Quaker Old Fashioned Oats in baking recipes. In 1966, Quaker Instant Oatmeal debuted to help people keep pace with a busy, on-the-go lifestyle. Quaker Instant Oatmeal expanded from pouches to cup packaging in 2000, making portable eating even easier.