By Newsroom on May 1, 2013Comments Off on Range Of Attractive Bottled Beer Inspired By Iconic German Typeface 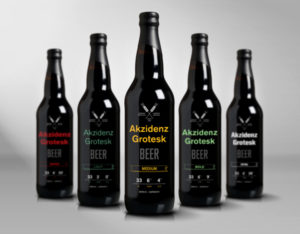 Portuguese communications designer João Andrade likes German san serif typeface first published in 1896—Akzidenz-Grotesk—so much so that he decided to create a beer in honor of it.

To celebrate the popular and very versatile font—which the designer hails as “one of the greatest and most influential typographies in history”—Andrade has created a total of five beer bottle designs, with each corresponding to a specific version of the typeface.

Matching the different weights and widths of the typeface to the amount of alcohol in each beer, the Akzidenz-Grotesk beer comes in light, medium, bold, extra and super.

We are hoping that the designer would work with a brewery and turn this attractive branding project into an actual beer.

View more images of the beautifully designed beer bottles below:

Range Of Attractive Bottled Beer Inspired By Iconic German Typeface added by Newsroom on May 1, 2013
View all posts by Newsroom →