By Newsroom on March 21, 2013Comments Off on Rare Balvenie 50 Year Old Scotch Comes to Quebec 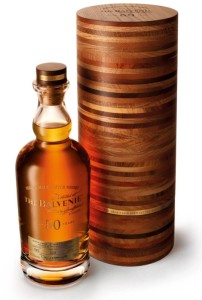 On March 28, Quebec will receive the last bottle of The Balvenie 50 Year Old released in Canada.

As one of the most extraordinary whiskies to ever come out of The Balvenie distillery, The Balvenie 50 will be released to Montreal’s Signature SAQ, retailing for $49,400.

This bottle is one of only 88 to ever be produced, and will be one of the last remaining for sale in the world.

Last November, the first of only two bottles distributed to Canada sold in Vancouver. The coveted single malt scotch sold within minutes of its release, to a local whisky aficionado.

The Balvenie 50 Year Old was released in 2012 to honor and celebrate the 50 year anniversary of The Balvenie distillery Malt Master, David Stewart, the industry’s longest standing Malt Master and an industry wide master and innovator in the field.

Balvenie takes pride in using traditional methods and quality craftsmanship combined with the innovations of the industry’s most revered Malt Master, David Stewart.

“Quebec was a natural market for this very exclusive quality variant we had on offer,” says European Whiskies Brand Manager for William Grant & Son’s, Beth-Anne Thomas. “The local audience has an appreciation for the craftsmanship and quality we are so proud to be able to offer to the Canadian market.”

The Balvenie Fifty was matured in a European oak sherry hogshead, rarely used today in whisky making. Under the watchful eye of David Stewart, the spirit slowly matured into an outstanding single malt Scotch whisky over the past 50 years.

The particularly long maturation has created a wonderful fragrant and floral whisky, which is velvety sweet with a beautifully balanced combination of sweet citrus notes and gentle hints of honey, spice and oak.

With an ABV of 44.1%, the nose is fragrant and floral with fruit and oak lusciously intermingled. The finish is velvety smooth with a delicious citrus sweetness.

The Balvenie Fifty is presented in a hand blown glass bottle surrounded by a wooden case, created by Scottish craftsman, Sam Chinnery, from Scottish grown timbers including Banffshire Elm grown on The Balvenie site.