By Newsroom on March 4, 2014Comments Off on Ruffles Introduces Potato Chips Inspired By Buffalo Wild Wings 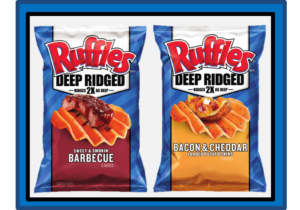 The real food flavors of classic hot wings are soaring into the chip aisle as Ruffles, one of the many brands that makes up PepsiCo’s Frito-Lay division, introduces Ruffles Deep Ridged Classic Hot Wing flavored potato chips inspired by Buffalo Wild Wings. The new flavor, which hits store shelves this month, offers a unique combination of tangy vinegar, chicken and hot sauce reminiscent of the popular wings found on the Buffalo Wild Wings menu. With ridges two times as deep as regular Ruffles potato chips, it is a flavor sure to add a kick to just about any gathering.