By Newsroom on February 27, 2013Comments Off on Ruffles Launch The Ultimate Party Snack For Guys

Ruffles, one of the flagship brands from PepsiCo’s Frito-Lay division, is bringing guys the awesome flavor and delicious crunch of one of their favorite snack foods — beer-battered onion rings — to a potato chip. 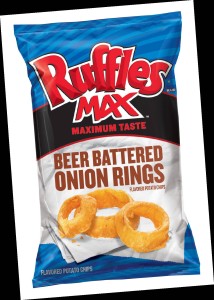 With the introduction of Ruffles MAX Beer-Battered Onion Ring flavored potato chips, guys can now load up on all of that crunchy, onion-y-flavored goodness they’d find at a bar or tailgate party with a snack designed to fuel any gathering.

Tapping into a hot trend and just in time for the sports and party season, Ruffles MAX Beer-Battered Onion Ring flavored potato chips speak to the now-iconic American bar food.

According to CNN’s Eatocracy food blog, onion rings rank second only to their French-fried potato cousins in popularity. In other circles, the onion ring has gained more popularity than some of our favorite pop-culture icons, humorously showcased in social media memes across the web.

“Guys live for those moments when they’re hanging out together at a bar, diner or tailgate party trading epic stories and munching on their favorite snacks,” explained Tony Matta, vice president of marketing, Frito-Lay North America.

“Onion rings are one of those staple guy-get-together foods. We wanted to incorporate that flavor for guys to share for any impromptu gathering — just grab a bag off the shelf and throw a party with your crew.”

The Ruffles brand is going all out for guys as the calendar shifts from the quiet of winter to the party atmosphere of spring. College basketball is at its apex, Spring Break trips are underway, and the shenanigans of St. Patty’s Day are upon us.

The snack is available for a limited-time nationwide where Ruffles chips are sold.

Ruffles Launch The Ultimate Party Snack For Guys added by Newsroom on February 27, 2013
View all posts by Newsroom →