The brewers at Samuel Adams are ushering in the new year with a new spring beer—Samuel Adams Cold Snap—the newest addition to the brewery’s popular seasonal beer collection. Brewed for spring’s transition away from the hearty brews of winter to the bright, lighter-bodied beers of summer, Cold Snap is the brewers’ take on a Belgian-style white ale made with crisp golden wheat and a lively blend of ten different fruits, flowers and spices.

Historically, white ales were brewed with a variety of spices, most commonly orange and coriander, as brewers looked to the spice trade for ingredients before the advent of hops.

The brewers at Samuel Adams took a different spin and expanded upon this tradition with Cold Snap, incorporating a wide range of ingredients from around the world, places like West Africa (Grains of Paradise), Turkey (anise), Egypt (hibiscus), India (tamarind) and the US (fresh-ground coriander from California).

The delicate hop character of German Hallertau Mittelfrueh Noble hops and the crisp smoothness of Canadian malted wheat balance the unique spiciness of the brew. 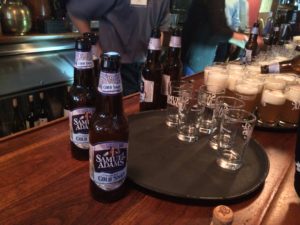 With an ABV of 5.3 percent, Cold Snap is a medium-bodied yet refreshing ale with a complex floral, spicy aroma and character. The brew begins with the Belgian white ale tradition of brewing with spices such as orange and coriander.

Samuel Adams Cold Snap takes this to a new level with a wide range of exotic fruits, flowers and spices such as dried plum, hibiscus and anise, as well fresh-ground coriander, to create a perfect balance of flavor and character. Pale and wheat malts give this unfiltered brew its hazy golden appearance and crisp, smooth finish. Hallertau Mittelfrueh hops balance the smooth wheat and spices with a subtle touch of citrus hop character.

Jim Koch, Samuel Adams Founder and Brewer, commented: “As brewers, we’re like chefs, inspired by the weather and the seasonality of ingredients and flavors. I’ve always said that spring is one of the most challenging seasons to brew for. It’s a tweener – we’re waiting for winter to be over and longing for summer to arrive. For us, Cold Snap captures this sentiment with its crisp wheat and vibrant fruits, flowers and spices, yielding flavors ranging from the subtle sweetness of orange peel and plum to the distinct, peppery bite of fresh ground coriander.”

Additionally, Samuel Adams Cold Snap will be available, alongside the new Samuel Adams Escape Route, in the Samuel Adams Spring Thaw Variety 12-Pack for a suggested retail price of $14.99-$17.99 (prices vary by market).