Sloane Bros. to Take Froyo Brand National – with Plans to Open More Stores Across the UK in 2017

By Newsroom on January 16, 2017Comments Off on Sloane Bros. to Take Froyo Brand National – with Plans to Open More Stores Across the UK in 2017 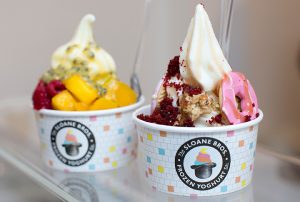 The UK’s newest independent frozen yoghurt parlour, The Sloane Bros Frozen Yoghurt Co., has announced that they are launching their distinctly British froyo brand nationally in early 2017 and globally in 2018.

Off the back of the success of their initial Brick Lane store, which has attracted local press and celebrities alike, and their shopping centre location in Intu Nottingham, Sloane Brothers is preparing to open a number of new locations across the country, and respond to incoming enquiries from overseas businesspeople who have asked about franchising.

The idea for Sloane Bros. came when founder, Joe Chakra, concluded that there wasn’t a frozen yoghurt brand with a clear focus on British craftsmanship and dairy tradition. This was despite the fact that British dairy is known around the world for its superior quality and taste. Most other brands draw inspiration from American culture, which adopted a dairy diet long after the UK. 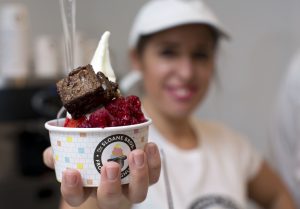 Sloane Bros opened its first shop in trendy Shoreditch in June 2015, and soon became a local favourite, before its reputation for tasty products and outstanding service spread outside the capital and generated repeat footfall and a significant social media following.

Sloane Bros.’ first outside of London location idea was “crowd sourced”; after receiving several requests to open in Nottingham, Sloane Bros studied the idea and found that the location would be a perfect fit, and worked closely with Intu Victoria Centre to make this a reality. 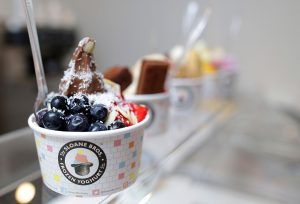 Sloane Bros. has also been constantly innovating, thanks again in a large part to their active and vocal social media following. The company introduced its registered trademark Fraffle, which combines a crunchy-on-the-outside and soft-on-the-inside waffle, together with its creamy fat free froyo. They have also introduced a Sloane Bros. breakfast cup made with organic Açai and the Sloane Bros. Nottingham’s Victoria Cup. More recently, and to celebrate Mary Shelley’s upcoming 200 year anniversary of writing Frankenstein, the company introduced its monstrous Franken’ Fraffle creation.

To continue in the spirit of involving their customers in the business, Sloane Bros. is now offering its community a chance to own a spoonful of the company. To support their next stage of growth, Sloane Bros. has (12th January 2017) launched a crowdfunding campaign on the leading UK equity crowdfunding platform, Crowdcube.

Sloane Bros. to Take Froyo Brand National – with Plans to Open More Stores Across the UK in 2017 added by Newsroom on January 16, 2017
View all posts by Newsroom →