Smirnoff White is inspired by the innovative nature and inventive spirit of founding father, Vladimir Smirnoff, who was determined to shake up the world of vodka in his quest for perfection. Neither the nationalisation of his successful vodka business nor a revolution that forced him and his family to leave Russia made him waiver in his commitment to innovation. He rebuilt his business founded on pioneering principles which, today, have inspired the brand and the creation of Smirnoff White.

Smirnoff has continuously adapted and evolved, kick-starting a cocktail revolution in the 1950s, as a result, aficionados have included Hollywood icons.

Global travellers should look out for special Smirnoff White pop-ups in airports around the globe where they can sample the sensationally smooth vodka and purchase a bottle to take home. The striking, crisp white bottle of Smirnoff White reflects the 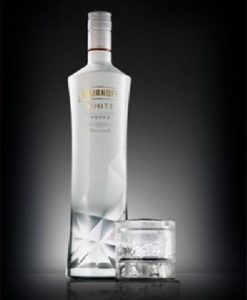 crystalline formations found in the purest arctic ice and highlights the distinctive quality of this new vodka. A clear cut-glass base transforms into a smooth, white finish towards the neck of the bottle where the Smirnoff White logo appears, as if etched into a block of solid ice.

“We’ve chosen duty free as the sole global outlet for Smirnoff White in order to reward travellers who seek unique offerings to enhance their experiences and to serve as a momento of their travels.”

Smirnoff White is best served neat or over ice, but can also be enjoyed as part of a favourite cocktail. From this week, Smirnoff White will be rolled out to duty free stores across the globe exclusively for travelers, at a recommended retail price of £21.00 for 1 litre.