By Newsroom on October 9, 2015Comments Off on Smithfield Launches Largest US Broadcast Advertising Buy

Smithfield launches its largest US broadcast advertising buy, featuring the “Flavor Hails from Smithfield” campaign, which celebrates the brand’s craftsmanship, culinary history, and commitment to flavor.

The multimillion-dollar advertising campaign rolls out in two waves throughout the fall and winter over US network and cable television.

“This national broadcast advertising buy marks another critical milestone in Smithfield’s journey as a national CPG brand, further establishing our heritage, commitment to flavor, and leadership role in the industry,” said Will Brunt, Senior Vice President and Chief Innovation Officer. 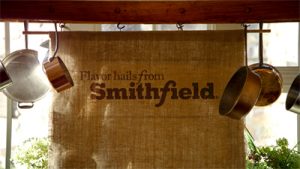 “As the world’s largest pork producer, we hold ourselves to the highest standards, from the quality and flavor of our products to our emphasis on corporate social responsibility, and we believe these ads will help reinforce to consumers nationwide what makes Smithfield truly special.”

The “Flavor Hails from Smithfield” spots will air nationally on all three major network morning shows – ABC’s Good Morning America, CBS This Morning, and NBC’s TODAY Show – along with top-ranked cable networks, including primetime programming on HGTV, USA Network, Lifetime and the Food Network. The 30-second spots will run in two flights through the end of 2015, delivering over 1.6 billion impressions in the U.S. leading into and throughout the holiday season. The ads will also appear on social media channels and through online video. The commercials will air through December 23, 2015.

Created by Doner, Smithfield’s advertising agency of record, the ads highlight Smithfield’s rich heritage and the company’s dedication to craftsmanship and bringing families together over flavorful meals in a markedly original spot. The brand’s legacy of providing high-quality and flavorful food products along with its superior attention to detail and beautiful appetite shots are a consistent thematic of the ads’ creative tone.