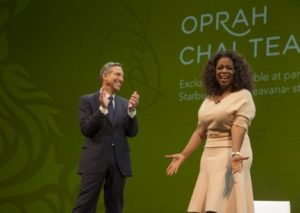 Beginning April 29, Teavana Oprah Chai will be sold in Starbucks and Teavana stores across the U.S. and Canada, with Starbucks making a donation for each product sold to the Oprah Winfrey Leadership Academy Foundation to benefit educational opportunities for youth.

Oprah Winfrey personally developed the tea with Teavana’s leading teaologist Naoko Tsunoda. The distinctive blend of tea, which features a bold infusion of cinnamon, ginger, cardamom and cloves, blended with loose-leaf black tea and rooibos, will be made available to customers in time for Mother’s Day in the U.S. and Canada in handcrafted latte and loose-leaf tea formats.

“I looove tea,” said Oprah Winfrey. “My daily tea ritual is a vital part of my morning. Savory and spicy chai, with its deep flavor, has long been a favorite of mine. When Howard Schultz offered to have me come into the Starbucks tasting room and create my very own tea blend, I thought that sounded like such a unique opportunity and fun to the tenth power. To share one of my favorite things with the rest of the world and support youth education at the same time is truly the perfect blend.” 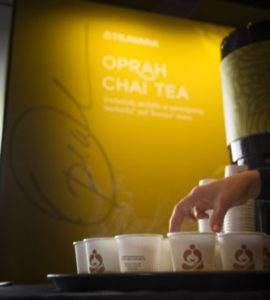 “With the introduction of Teavana Oprah Chai, we are going to elevate the tea experience in the same way we did for coffee,” said Schultz. “Partnering with Oprah Winfrey in the creation of this distinctive and remarkable tea is a strong next step forward in accomplishing this objective, while also giving back in a meaningful way through the Oprah Winfrey Leadership Academy Foundation. I am personally humbled to work with such an inspirational leader and visionary who shares so many of our core values and beliefs. I truly believe that, together, we will set the bar for a world-class tea experience at Starbucks and Teavana.”

Contributions from sales of Teavana Oprah Chai products will go to the Oprah Winfrey Leadership Academy Foundation, which provides funding for the Oprah Winfrey Leadership Academy for Girls – South Africa and is dedicated to helping its graduates attend colleges and universities. The foundation will support additional youth education through Girls Inc., National CARES Mentoring Movement, Pathways to College and the U.S. Dream Academy.