By Newsroom on July 27, 2017Comments Off on Stoli Vodka Served up as Atomic Blonde’s Answer to James Bond’s Martini 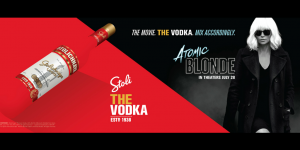 Stoli Vodka has partnered with Universal to be the drink of choice for its James Bond-like femme fatale, Charlize Theron’s Atomic Blonde.

While Bond’s touted many alcohol brands, in particular his ‘shaken, not stirred’ vodka Martini, Atomic Blonde will gain prominence as the tipple of choice for the secret agent, underlining how versatile the drink is in cocktails.

The co-branded campaign will see the Stoli feature prominently in the movie, bolstered by a multimedia campaign running through August that encapsulates activity on TV, out of home, print, digital ads and social media.

Russell Pareti, vice president of marketing at Stoli Group USA said: “When we learned about Atomic Blonde and Charlize Theron’s Agent Broughton, we quickly recognised that this was a character that was original, bold and edgy – all core values of the Stoli brand. Establishing Stoli as the drink of choice for the next great super-secret agent was a natural partnership for the brand. While Bond had the martini, Agent Broughton drinks Stoli on Ice – a cold, no fuss cocktail chosen specifically to match her character.”

Stoli Vodka Served up as Atomic Blonde’s Answer to James Bond’s Martini added by Newsroom on July 27, 2017
View all posts by Newsroom →