By Newsroom on March 15, 2016Comments Off on Subway Pranks Liverpool FC Fans with Surprise Guest Appearances

Fast food outfit Subway has surprised four Liverpool FC fans who thought they were entering a competition to win a signed shirt.

Subway, which signed up as the club’s official food partner in 2014, worked with marketing agency Prism to install hidden cameras in the club shop in the Liverpool One shopping centre. 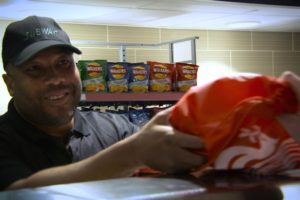 Manaaz Akhtar, European regional marketing director for Subway, said: “It’s great that we can work together with the club to create something that’s such good fun and also gives something back to the fans. The members of the public we surprised had a very memorable experience and the subsequent video highlights the strength of our relationship with the club as well as our commitment to training.”

Recently Subway came under pressure as part of a campaign by Liverpool fans against the club’s decision to increase ticket prices, forcing a u-turn by the club’s American owners.